WSU coach changes the way he treats athletes based on his experiences in the military. 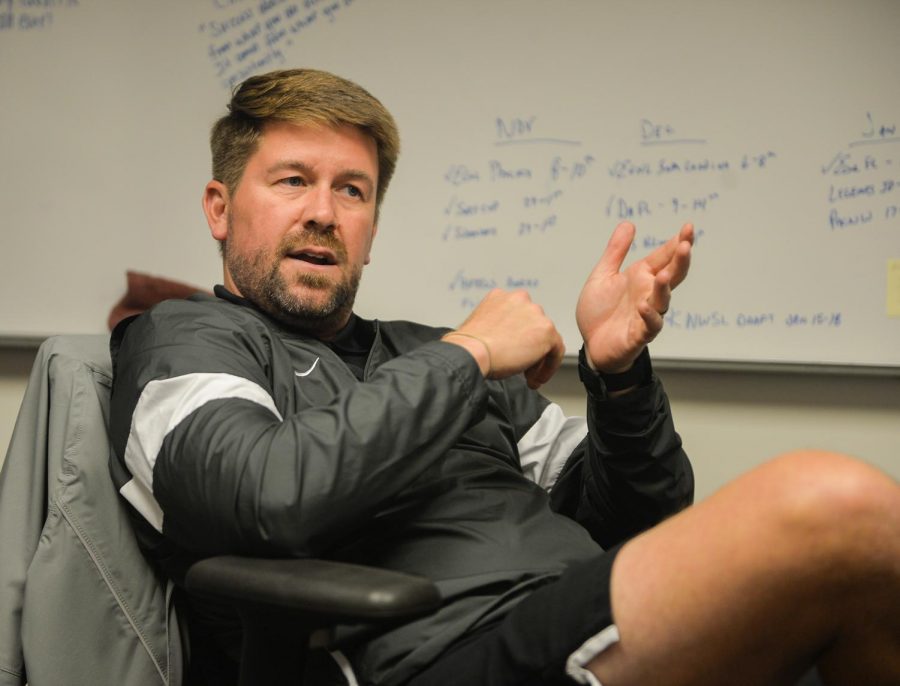 Soccer Assistant Coach Jon Harvey discusses the impact of the military on his life and his coaching style on Tuesday in Bohler.

In Pullman, Jon Harvey is known as a soccer coach at WSU who shaped athletes to be better people since his service in the United States Navy.

As an assistant soccer coach, his awards from the United States Navy hang on the wall above his desk in the soccer team’s offices in Bohler Gym.

Harvey served in two decorated combat tours in the Al Anbar Province, Iraq in 2004 and 2005.

“It was intense. It was exhilarating. It was boring at times,” Harvey said. “It was one of the greatest experiences in my life for sure and something I am proud of, but not something that does defines who I am. It was just something that I did.”

Harvey said he did not enlist to be a patriot, but felt it was just something he had to do in his life. After his time serving, he said he felt lost and coaching soccer was where he found sanctuary.

“It was an awesome experience and something I recommend for people if you have lost your way or don’t have something in your life that drives you,” Harvey said. “The military gives you a lot of structure and opportunity to kind of find who you are as an individual.”

This also changed the way he coached his athletes.

“You don’t know somebody’s story, you don’t know maybe somebody is struggling with something,” Harvey said. “I think that’s a big thing we try to pass on to our players here.”

“He has given me a lot of confidence and I am really appreciative of that,” Dederick said. “I just know after the game, he always comes up to me and always just tells me he is so proud of me.”

Dederick earned a spot on the United States U-23 Women’s National Team and All Pac-12 third team. She is the WSU soccer program’s all-time leader in wins and minutes and third in all-time saves. With 26, Dederick has the second all-time program career shutouts.

Jess Greer, who coaches alongside Harvey as coordinator of operations for the team, said he has been a mentor to her and treats her like family.

“He is a constant source of positivity and support for the girls,” Greer said. “I think his experiences from his military career have carried over into the coaching world, and he does his best to remind the girls this isn’t life and death and it has to be fun.”

Harvey starting his coaching career at North Georgia, which gave him the experience to get hired at WSU as the assistant coach and head recruiter.

Harvey recruited the current senior class that will lead the WSU soccer team into its first round into the NCAA Tournament against the No. 8 University of Memphis on Friday.

Harvey said he brings a unique perspective to shaping collegiate female athletes at Washington State beyond just the game of soccer.

“This is a great, enjoyable experience for student-athletes and young women in female’s sports to grow and mature,” Harvey said.

Harvey said the most important advice he gives his players is to remind them what they will be remembered for after the big saves or important goals they score.

“I am a big believer in that you are going to be remembered for how you treat people,” Harvey said. “Whether that was the equipment manager that you said thank you to for putting your jersey out, or your athletic trainer who taped your ankle, those guys are going to remember not the goals you scored, but how you treated them.”