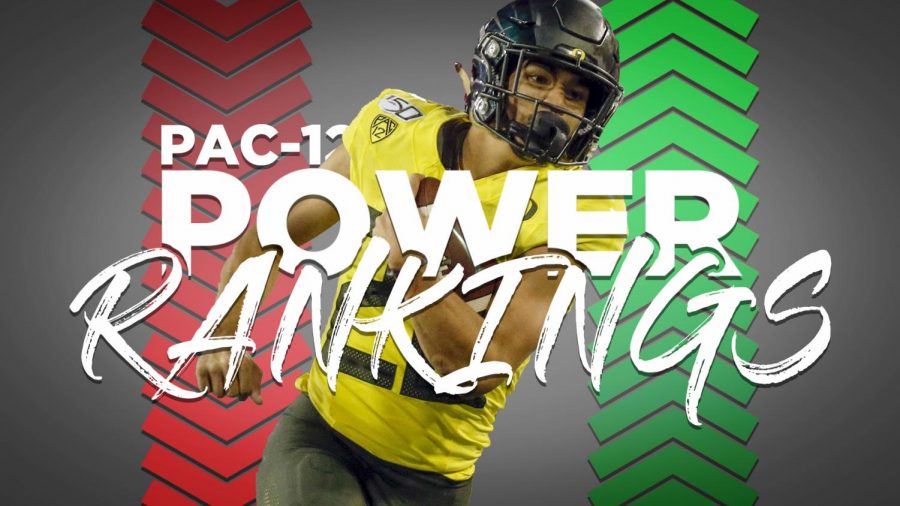 The No. 6 Ducks took down Arizona Saturday night in Eugene by a score of 34-6. The win means that Oregon has clinched the Pac-12 North and will play in the Pac-12 Championship Game on Dec. 6 against the winner of the Pac-12 South. Star quarterback Justin Herbert was the story again in the victory, throwing for a season-high 333 yards and four touchdowns. The Ducks travel to Tempe to face the Sun Devils this week.

No. 7 Utah continues to add to its CFP case after handling UCLA 49-3 on Saturday night in Salt Lake City. The Utes victory marks win number nine on the season and now sit comfortably at-top of the Pac-12 South standings. Utah running back Zack Moss keeps his tremendous senior year rolling as he finished with 127 rushing yards, two rushing touchdowns, and 73 receiving yards. The Utes travel to Tucson to face the Wildcats this week.

In a tightly contested game, the Beavers stopped an Arizona State two-point conversion late in the fourth quarter to secure a key 35-34 victory on Saturday in Corvallis. The win is OSU’s first at home against a Pac-12 team since 2016. Quarterback Jake Luton led the Beavers’ offense with four touchdowns and 288 yards, while junior linebacker Hamilcar Rashed Jr. tallied two sacks during the game to set the OSU single-season sack record with 14 sacks. The Beavers travel to Pullman to face the Cougars this week.

The Huskies did not play Week 12. They travel to Colorado to play the Buffaloes.

Despite a competitive first quarter, UCLA got overwhelmed by a much more talented Utah team with CFP hopes in a 49-3 rout. Quarterback Dorian Thompson-Robinson threw for over 200 yards, but turnovers stalled the UCLA offense throughout the game. With the loss, UCLA is all but eliminated from winning the Pac-12 South. UCLA will travel to face USC this week.

Looking to win rather than force overtime, ASU tried and failed a two-point conversion to lose an offensive shootout against Oregon State 35-34. Quarterback Jayden Daniels threw for 334 yards and three touchdowns. Arizona State has now suffered four straight losses. The Sun Devils host the No. 6 Ducks this week in Tempe.

The Golden Bears were competitive in the first half but a 24-7 run by the Trojans in the second half was too much for Cal to handle. Running back DeShawn Collins led the California offense with 103 rushing yards and two rushing touchdowns on 15 carries. The Golden Bears travel to Stanford to face the Cardinal this week.

With Dad’s Weekend in Pullman, quarterback Anthony Gordon surpassed Gardner Minshew and Luke Falk for Washington State’s single-season record for touchdown passes with 39 after his five-touchdown performance in the Cougars 49-22 victory over Stanford. Gordon also finished the game with 520 passing yards, his second 500-yard game this season. Washington State will host Oregon State in Pullman this week.

The Cardinal couldn’t overcome a vibrant Martin Stadium and a 19-0 deficit early in the second quarter against the Cougars losing 49-22. Stanford quarterback Davis Mills, who was replacing quarterback KJ Costello, put together his first career 500-yard passing game with a final stat line of 504 yards, three touchdowns and two interceptions. This game is only the second game in the FBS this season to have both quarterbacks throw for over 500 yards in the same game. Stanford hosts California this week.

Colorado did not play Week 12. They will host the Huskies this week.

The Wildcats were handed their fifth straight loss against the red-hot No. 6 Oregon Ducks as they could only muster 132 passing yards from two different quarterbacks and two field goals. With Arizona looking uncompetitive since starting the season 4-1, a change in the coaching staff could be in the foreseeable future if play doesn’t improve. However, it won’t be easy. Arizona host No. 7 Utah this week.