SATIRE: Chaos ensues when popcorn stand runs out of, you guessed it, popcorn 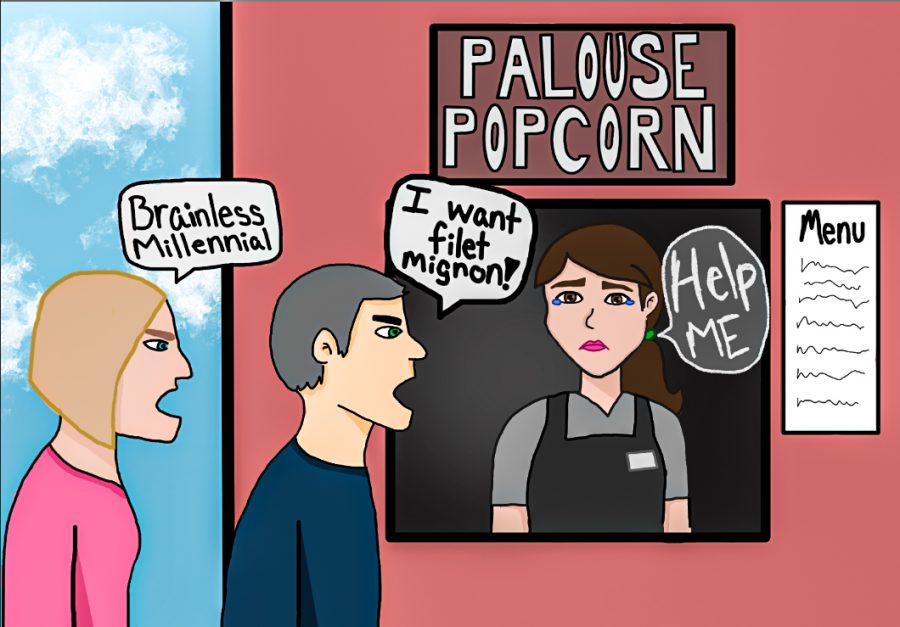 Complaints have surfaced in the past few weeks surrounding Palouse Popcorn, a local restaurant opened in early September.

According to several esteemed food critics, Palouse Popcorn suffers from a dismal menu and poor customer service as well as other problems. Among those at the forefront of the battle against the restaurant was Carver Memphis III, a Local Guide on Google Reviews.

“I’ve been to Palouse Popcorn three times since it opened,” Memphis said, “and every single time, I was told I couldn’t order the filet mignon I wanted, and that the restaurant only has popcorn. They wouldn’t make an exception even though I’m practically a regular at this point.”

After the third time, he said, he had no choice but to give Palouse Popcorn one star on Google, Yelp and Facebook.

Memphis said he dislikes the location also because it lacks proper seating and decor. The order-and-go format, he said, discourages people from getting comfortable and gives the restaurant too much of a “fast-food feel.”

“I want to sit down, have a few drinks with my companions,” Memphis said. “But the window-style ordering and bench seating makes it hard for me to even want to stick around longer than it takes to get my food.”

Fellow local guide Bertha Vela also had criticisms to share. Her first review, published the day Palouse Popcorn opened, recounted the chaos of that day. She said the restaurant ran out of popcorn right as she got to the front of the line, and she had to wait an extra five minutes while employees made more.

She said, however, that the people taking her order made the experience truly terrible. That, she said, has not changed in the entire three months the restaurant has been open.

“Last time I was in, the brainless millennial taking orders held up the entire line for 10 minutes because some guy’s card wouldn’t run,” Vela said. “I made sure to give her a piece of my mind once I got to the front of the line. In the time it took for me to get there, I had 12 bullet points to go through with her.”

WSU sophomore Lee Ann Briggman said she was the one working that day when Vela offered her advice on how to fix the restaurant. It started a bit of a domino effect, she said, because the customers behind Vela started to get agitated after waiting for the 15 minutes it took to go over all 12 bullet points.

Briggman said she gets these types of complaints at least once a shift.

“I really don’t understand it,” she said. “We’re a food truck, not an upscale restaurant. And it’s called ‘Palouse Popcorn,’ — we do different kinds of popcorn. That’s it. But I guess the customer is always right, so we’ll probably have filet mignon on the menu in the next few weeks.”