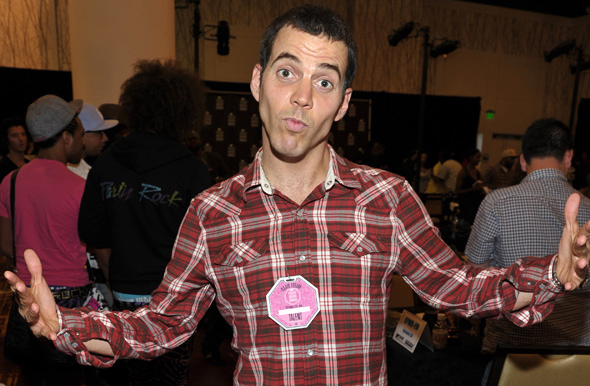 Student Entertainment Board presented a Q&A event featuring Steve-O who was formerly with the group Jackass.

A line of almost 900 students wound around the CUB Wednesday night as they waited to get into the CUB Senior Ballroom expecting to hear Steve-O, formerly with the group Jackass, speak on mental health.

However, this was not the case. Though the talk was advertised as a talk about mental health, very few of the questions were asked about the topic.

When asked what the WSU community could do to end the stigma on mental health, Steve-O said he does not think there is a stigma attached to mental health.

The event was a Q&A moderated by Mariela Frias-Gomez. The questions covered everything from what Steve-O thinks should be done to end the stigma around mental health to what his favorite animal is. To this question, he promptly answered his dog, Wendy, who slept quietly on the couch opposite him next to Frias-Gomez during the talk.

Many of the questions centered around Steve-O’s fame and celebrity status, which he still loves and he said he knew he craved from a young age.

“I don’t want to attribute any of that, my addiction, alcoholism, my struggles with mental health, I really don’t tie that to success or fame, ” Steve-O said.

He also said there is nothing healthy about him feeling important about being recognized by someone or feeling bad about himself or washed up from not getting attention. He said the way to combat this was to separate who he was a person from the professional success he has attained.

His candid remarks resonated with students attending the talk. As he described, the first thing he would do with five free seconds on national television was him whipping out his “weiner” and saying  “save Shamu.”

Sophomore psychology major Gabriella Covarrubias said, “I just liked how he was super lighthearted, didn’t care about anything he said. He was okay with anything that came out of his mouth, and he was honest about everything he did.”

As one of the last questions of the night, Frias-Gomez asked Steve-O to reflect and ask himself what advice he would give his younger self.

“If it ever occurs to you that you want to go back and tell a younger version of you to stop, maybe consider that you are telling a version of yourself and take the advice now,” Steve-O said.