In his blood: DTC professor shares his passion for teaching 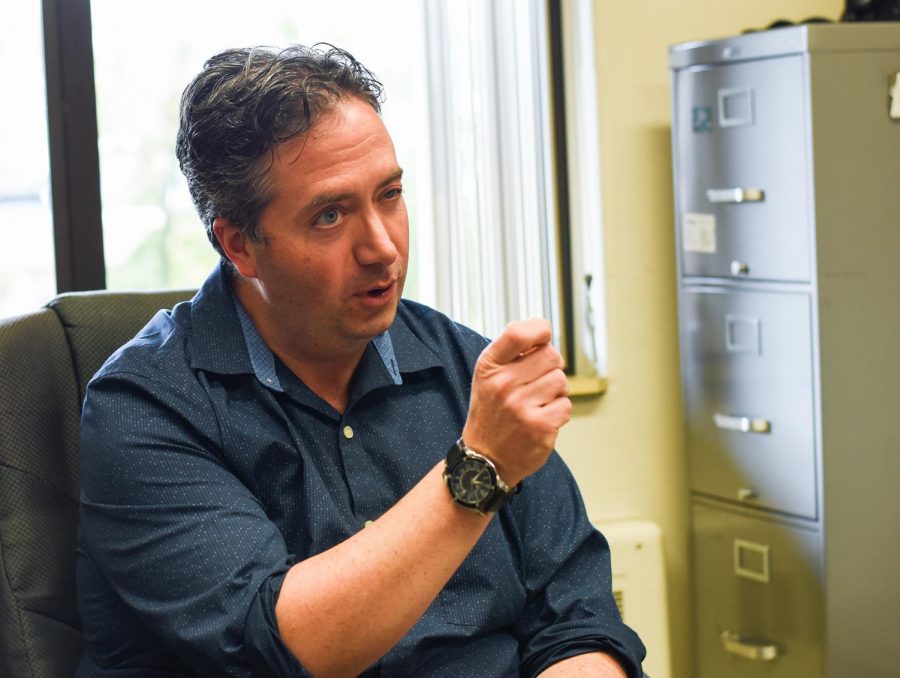 Tor de Vries, clinical assistant professor of Digital Technology and Culture, discusses his goals and passions in teaching Oct. 18 in Avery Hall. He said teaching and knowing something are very different.

For Tor de Vries, clinical assistant professor of digital technology and culture, teaching is “in his blood.”

“That moment when a student gets it. The moment when they were like, ‘Oh, it worked,’” he said. “That’s the passion for me: helping people understand.”

If he had the option to major in DTC when he went to college, de Vries said that he would have — especially after seeing what the WSU program entails.

“Instead of being skill focus on Photoshop or design or just business focus like, ‘How do we make a profit?’ It’s humanity focus,” he said. “That’s why I enjoy DTC.”

De Vries said he believes the development of technology in the digital age changes depending on the culture in which it’s created.

“[My dad] bought a computer in 1979, and I showed him how to use it. That’s how quickly I picked it up. I was programming when I was 6 years old,” he said. “There are so many things that we’ve taken for granted, which are the products of the culture in history.”

De Vries has worked as an art director and web producer for 13 years at EngenderHealth, an international women’s health nonprofit. His goal was to convert his decades of experience into concrete and understandable learning moments for his students, he said.

In his DTC 478 class, Usability and Interface Design, de Vries incorporated the Center for Civic Engagement into the course in an effort to help students gain the experience they will need in the workforce, such as working with clients.

“They are working with the actual nonprofits in the area to redesign their websites,” de Vries said. “At the end of the process, they will have something to look at like, ‘Yeah, we created a real thing for a real client.’”

Cory said de Vries took peer reviews from students in his DTC 478 class and paraphrased their comments to ensure that the feedback would be professional. This was also done to make sure his students would not have negative feelings toward each other.

“He is the best professor I’ve ever had,” Cory said.

Cory is taking both of de Vries’ DTC 355 and DTC 478 classes this semester.

After talking to de Vries, Cory said she received helpful instructions and support for every assignment.

De Vries said he thinks it is OK to make a mistake because nobody is perfect.

“I learned stuff the hard way. I made a lot of mistakes,” de Vries said. “There’s actually been a couple of times in the middle of the demo I made a mistake. But I try to turn it into a learning opportunity.”