Letter: I will find my way back home

Ryan joined the Evergreen as a photographer; there he found a home and a family 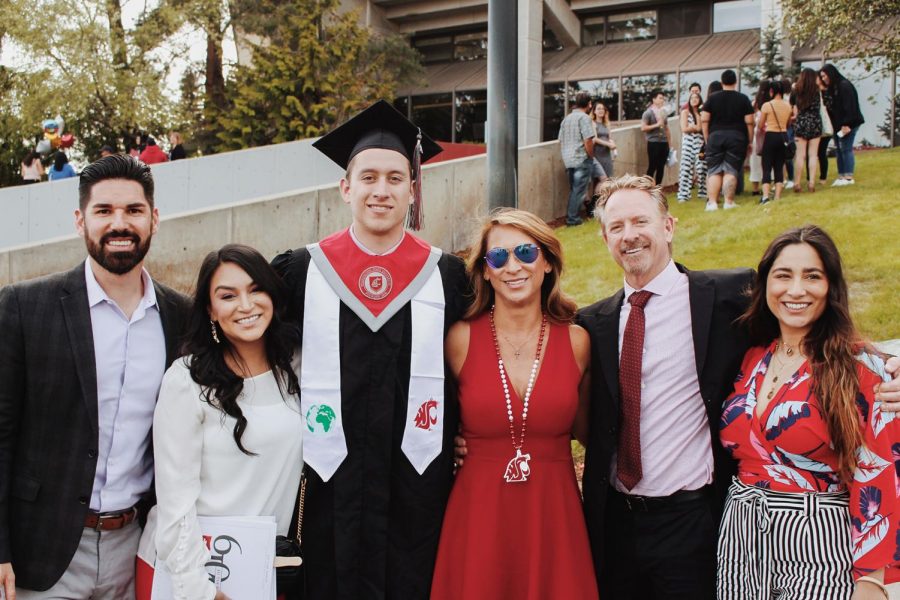 Ryan Pugh, a Daily Evergreen photographer, poses with his family during his commencement ceremony in May. He said he began to grow closer to his coworkers and would look forward to the weekend parties where he would spend time with them.

I remember the day I left home and made the three-day drive to WSU for the first time. I barely talked to my dad as he drove, I couldn’t stop shaking my legs and I had no idea what I was going to do.

I spent the next year being a worse student than I’d like to admit. I had two close friends and I never ventured too far away from them. If I wasn’t hiding away in my dorm room, I was hiding away in theirs.

By sophomore year my piggy bank had run dry, so I started looking for a job. I always had an interest in photography so when I found a photographer ad for The Daily Evergreen I thought it could be a fun side gig to make some spare cash. Little did I know about the commitment I was about to make.

When I first started, I wouldn’t spend any more time in the newsroom than I had to. I’d upload my photos from my shoot, grab my gear and run back to my apartment.

My boss invited me to a few parties, but I always said I was too busy. At the time one of them was the DJ for all the Evergreen parties. I didn’t know what to expect but eventually decided to try it out.

The moment I walked through the door I was greeted with smiles and hugs. I barely knew most of these peoples’ names and they were treating me like we had been friends for years. That’s when I realized how tightly knit this community was.

I noticed myself coming to the newsroom just to hang out, chatting with all the editors and eagerly waiting for the weekends so I could go to the Evergreen parties. My roommates even noticed I was not in the apartment as often. I had found a home and a family.

I’ve worked at the Evergreen for four years now and I can confidently say it was the best decision I made in my college career.

As Evergreeners came and went throughout the years, new friendships were made and never lost. Many Evergreeners have gone on to work in many different states but when they come back to Pullman, it’s as if they never left.

The Daily Evergreen and Pullman will always hold a special place in my heart. I’m sad I have to go but I can’t wait until the day I come back and know I found my way back home.