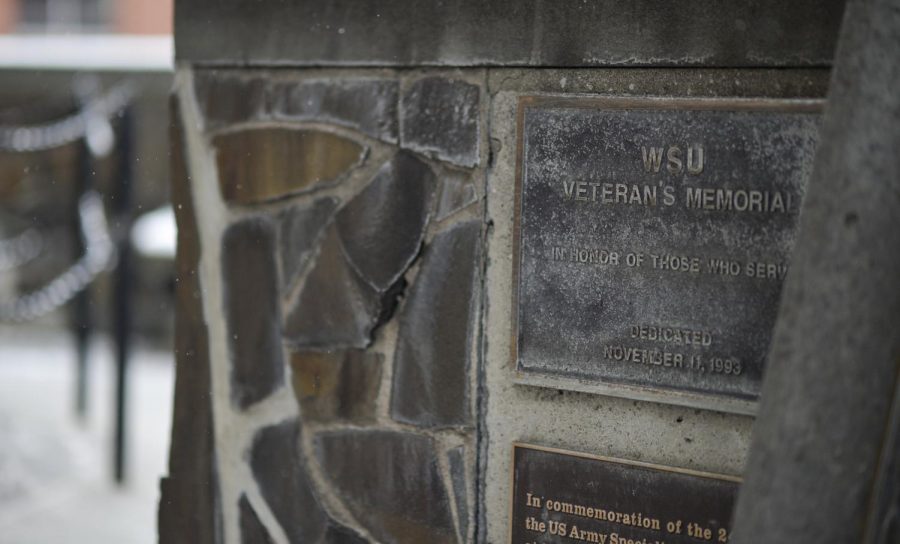 The WSU Veteran’s Memorial stands outside next to Jackson Hall on Sunday. Ray Sun, associate professor in the history department, said the Fallen Cougars Project began in 2017. Sun recruited students from his fall 2017 and spring 2018 classes to work on the project.

Students and faculty in WSU’s history department are compiling a digital collection of biographies on former students who died while serving in World War II.

Samantha Edgerton, doctoral student in the history department, said the purpose of the Fallen Cougars Project is to include more than just a name or number to represent students who died during the war.

“These people weren’t just passing through,” Edgerton said. “There were real-life students at WSU.”

They hope to create biographies for around 200 students, she said. Edgerton finished about 17 biographies this past summer.

Ray Sun, associate professor in the history department, said he got the idea for the project in 2017. He attended a conference and was tasked to initiate community service projects to raise awareness and knowledge specifically about WWII.

“WWII is now about 75 years old,” Sun said. “It’s really important to create a 21st-century forum where people can connect and learn about these Washington State students who served and died in the war.”

Sun said he recruited undergraduate student volunteers in his fall 2017 and spring 2018 courses to help with the project. Sun plans on recruiting more students this spring.

To start the research process, Edgerton said she gathers initial information beforehand, which includes letters and photos from family members or spouses of the students. Then Edgerton would use different websites to search for additional information such as where the students served or died.

“These are just […] ordinary, young men who came from, a lot of times, small towns and the agricultural belt,” Edgerton said. “Who are suddenly transported to […] the Philippines to fight in these terrible battles.”

In addition to searching on websites, Edgerton said she would look through old yearbooks and newspaper clippings. She looks for citations they receive, whether it would be a Silver Star or Purple Heart.

The Silver Star is awarded to an individual involved with the United States Armed Forces and is considered the third-highest medal, according to the Military Awards for Valor website. The Purple Heart is awarded to those wounded or killed at war.

As she sought out stories for name after name, Edgerton said, Myron B. Carstensen was one of the students who stood out the most.

“He won a prize of 50 cigarettes [from] the Phillip Morris contest on campus,” Edgerton said.

“When he was over there — in the Philippines even before the war started — [he would] take one plane that was salvageable and take a few other planes that were completely wrecked and make a new plane out of it,” Levesque said.

Hughes was a prisoner of war, Levesque said, and he died when a torpedo hit the ship as he was transported from the Philippines to Japan.

Edgerton said she had family members who served in WWII. One of her grandfathers was responsible for writing letters of condolences to families and spouses.

“My husband and I went to Pearl Harbor and the Arizona Memorial on our honeymoon,” she said. “As I grew as a historian, I continued to develop the interest. Writing biographies is actually one of my favorite things to do.”

Levesque said the Fallen Cougars Project is an opportunity to provide a voice for students who lost their lives serving in WWII.

“When we’re focusing on WWII, they see the statistics of people that died and their names on a piece of paper,” she said. “We don’t really think of them as actual people.”

Sun said not a lot of people know about the WSU Veteran’s Memorial, which is located next to Jackson Hall. He said he hardly sees people visit it.

“Once you lose that person behind the name on the fire, it just becomes a name,” Sun said. “What I’m trying to do with this project is to revive […] the people that these names represent.”