Trump wall on the mall 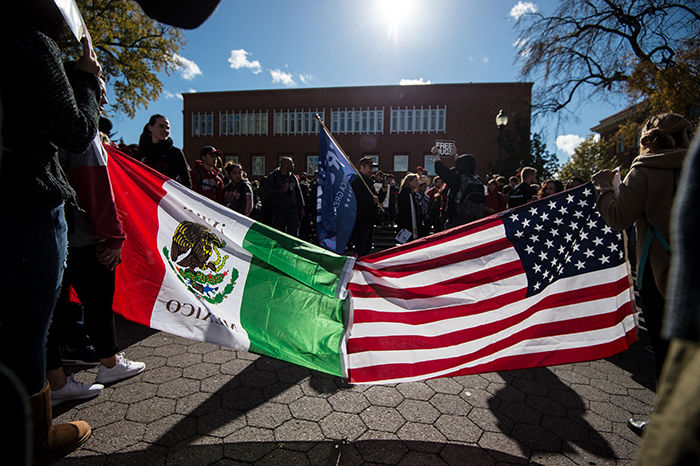 A brisk Wednesday morning on the Glenn Terrell Friendship Mall heated up quickly as hundreds of people gathered between the library entrance and the Todd steps, where the WSU College Republicans built a wooden replica of Republican presidential candidate Donald Trump’s proposed wall along the U.S.-Mexican border.

Unity Rally participants, opposed to the wall’s construction, chanted from across the mall: “We didn’t cross the border, the border crossed us;” “The people united will never be divided;” “Fight ignorance, not immigrants.”

The Unity Rally began at about 9 a.m., said Gavin Pielow, president of the Young Democrats of WSU. Many groups participated, he said, including Movimiento Estudiantil Chicana/o de Aztlán (MEChA), the Young Democrats, the Middle Eastern Student Association, the Black Student Union and others.

“We are here to show that this is a place of inclusiveness and not exclusiveness,” Pielow said. “To show the College Republicans the face of the people they are offending. To show them that they are outnumbered, outvoiced and outvoted.”

Pielow wore a Statue of Liberty costume and held a sign which quoted Emma Lazarus’ sonnet, “The New Colossus,” engraved at the base of the actual statue. His sign read “Give me your tired, your poor, your huddled masses,” which he said references a nation built on giving opportunity to immigrants.

“It doesn’t bother us,” he said. “We are all being peaceful.”

Many involved with the Unity Rally wore orange ribbons, which stand for unity, said Juan Oronia, chair of MEChA’s Empowerment and Self-Determination Committee. Participants could also leave a thumbprint on a painting of a tree, which Oronia said showed that although everyone comes from different roots, together, they form a tree.

Oronia said a committee of organizations planned the Unity Rally as an effort to protest and show opposition to the wall. He said they believe the wall divides people, so they are trying to unify instead.

Oronia said another big part of their efforts is to encourage people to vote in the elections and for the initiatives, and to bring more political awareness.

“Not all illegal immigrants are bad,” he said. “They want better lives for themselves.”

He recognized the contribution of immigrants, having come from an agricultural town which he said was 60 percent Latino.

“They are vital to our economy,” Heinen said. “They contribute a great amount to agriculture operations. These are jobs that Americans just won’t do for $12 an hour. I don’t believe in deporting 15 million people. We need them on our farms.”

He also said he’d rather the conversation focus less on the deportation of countless undocumented immigrants and more on making the legal immigration process easier. He said he believes people have misinterpreted the movement.

Community Congregational United Church of Christ Minister Stephen Van Kuiken said immigrants are being scapegoated. He said they are not detrimental to society, but beneficial and ought to be admired, embraced and helped.

“We must resist the temptation to slam the door shut after we’ve walked through, after our families have entered years ago,” Van Kuiken said in a speech during the rally.

He said he thought the rally was wonderful and an opportunity to unite the country, campus and community without becoming ugly or violent.

Fernando Reyes said it took his family five years to get naturalized as citizens. Laws are made for a reason, he said, and immigrants need to follow the laws to become citizens legally.

“Hispanics can come to our country,” Reyes said, “I’m Hispanic, my father came to this country and had me here, but they need to come here legally.”

Nate Hansberry, a sophomore international business major, said he is liberal but tired of beholden career politicians. He said he plans to vote for Trump.

“Trump is like a Republican Bernie Sanders,” Hansberry said.

Andrea Chavez, a junior psychology and human development major, said she risked her life crossing the border twice, looking for a better life and opportunity than her homeland offered her.

“This is a part of my life I don’t share with many people,” she said to the group gathered around her. “But today, I’m sharing with a crowd of strangers due to the bigotry, and negative stigma against Mexicans.”

Allsup said the Trump wall demonstration was received well and got a lot of positive attention.

“You don’t lock your doors because you hate what’s outside,” Allsup said, “you lock them because you love what’s inside.”

Mario Vega, a junior history major, said fear of retribution contributed to low turnout of women and people of color.

“We’ve been called racist,” he said, “and it’s insulting to minorities (who support Trump).”

Heinen said he had great conversations with people on the other side, and was “very pleased with the event in sparking mostly good, informative discussion.”