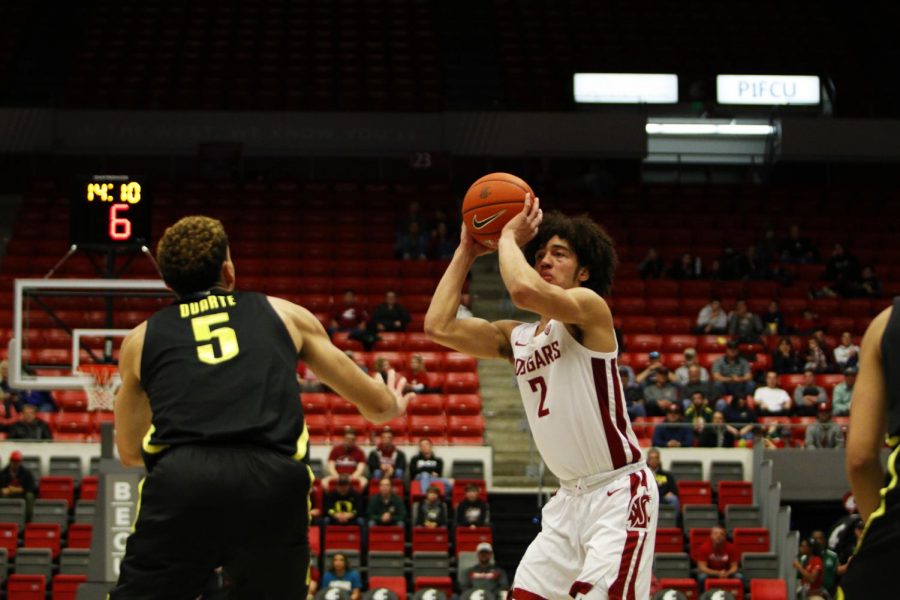 Spohomore forward CJ Elleby shoots the ball during the game against Oregon Thursday night. WSU upset Oregon, the first time the team has beat a Top 10 team since 2007. Elleby also set a career high for rebounds in a game.

The WSU men’s basketball team upset the No. 8 University of Oregon Ducks 72-61 on Thursday. This is WSU’s first win against a top ten team since 2007 after losing 19 straight.

Sophomore forward CJ Elleby led the Cougars (11-7, 2-3) with his second double-double of the season. Elleby scored 25 points and brought in 14 rebounds; a new career high in rebounds for him. This was a complete turn-around for Elleby after his performance against Stanford last Saturday when he scored six points and grabbed three rebounds.

Freshman guard Noah Williams made his debut in the starting lineup against Oregon (14-4, 3-2). This moved sophomore forward Aljaz Kunc to the bench. The first game this season that Kunc has not started.

Head coach Kyle Smith said earlier this week that the team would be running a smaller rotation; the Cougars played eight players against Oregon. Smith said this was a morale booster for the team in supporting each other through adversity.

Defensive efforts from both teams is what ignited this competitive match-up from the tip. The Beasley crowd erupted early in the first half as the newly hired WSU football coach Nick Rolovich entered the coliseum.

Smith said this win hopefully added to Rolovich’s “welcoming committee” and gave the coach an “aloha” in his post-game press conference.

When Oregon led 22-19, WSU made four three pointers and went on a 12-2 run. WSU made eight threes during the first half; a new season high for a single half.

At the half, Oregon led 37-34 with Elleby leading the game with 15 points.

In the first five minutes of the second half, WSU regained the lead with a 11-4 run to bring the score to 47-41. Oregon tied the game at 50 with 10:15 left in the game when freshman guard DJ Rodman responded with a crowd-popping 3-pointer and the foul.

With five minutes remaining, WSU led 58-53. WSU would not score again until over a minute later from back-to-back free throws from Rodman. Rodman finished the game with a new career high eight points.

Elleby and Smith both praised Rodman’s contributions after the game and are excited for his future at WSU.

With two minutes left, Kunc made a highlight block on Oregon senior guard Payton Pritchard which lead to an Elleby layup and one basket. A proceeding turnover from Oregon made the Beasley crowd explode with excitement.

Senior forward Jeff Pollard said the team’s defensive effort throughout the night was a large factor in the win.

“I think we were just active the entire night,” Pollard said. “It never really felt like we took a step backwards.”

Elleby contributed four 3-pointers himself tying the team’s individual season high. He jokingly expressed his performance gave him the “Splash Brother” label when asked about Klay Thompson arriving to WSU on Saturday.

“I think I’m like a cousin of the Splash Brothers or something,” Elleby said. “I’d fit right in.”

WSU will take on the Oregon State University Beavers at 1 p.m. Saturday at Beasley Coliseum. The game will air on Pac-12 Networks.