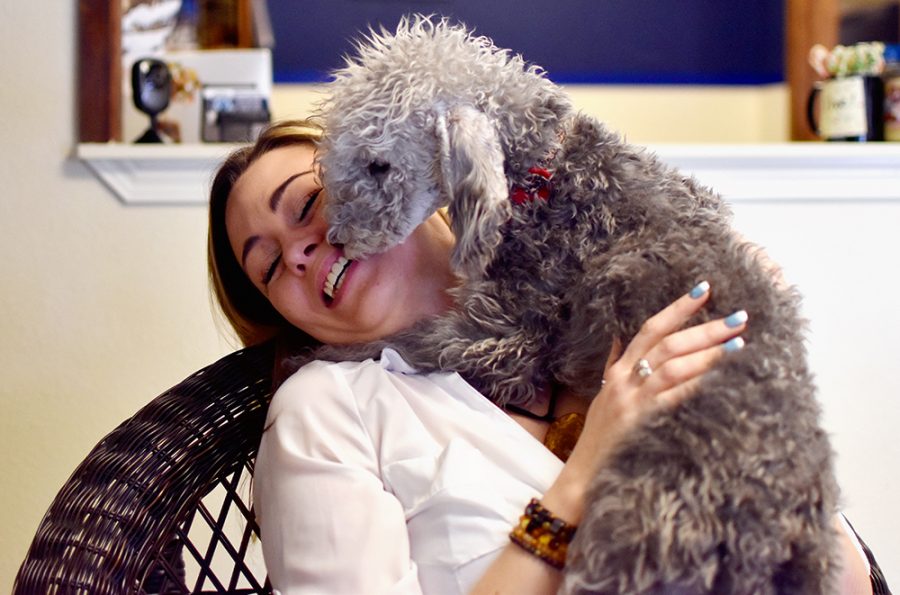 Walk into Amber’s Grooming Salon in the strip mall just off Bishop Boulevard, and customers will find an open waiting area with clean hardwood floors and large armchairs in the corner.

Amber Wright, owner of Amber’s Grooming Salon, said her clean shop is something her customers notice when they bring their pets in for a groom.

“I think it’s wonderful that people notice it,” Wright said. “People really just want to know that you love their dog or cat.”

Groomer technician Kenny Williams has been working at the salon since Nov. 2018. He said one thing he enjoys most about his job is greeting dogs with a treat when they come in.

There are no regulations or licensing requirements to practice pet grooming, Wright s

aid. Because of this, she ensures all her employees are well-trained and receive the American Kennel Club’s S.A.F.E. certification for groomers.

She said she has been grooming locally for about 13 years and she opened Amber’s Grooming Salon in April 2012.

“The shops that I’ve worked at in the past have been so much about speed and it was always about just money,” Wright said. “I wasn’t willing to cut corners as a groomer, even when I was working for somebody else.”

Opening her own salon was her way of changing the grooming industry, she said.

Wright grew up around a pet store and her family manufactured dog shampoo when she was a child. She said she got into pet grooming because she liked being around the animals.

“I can’t imagine my life any other way,” she said. “If I wasn’t doing this, I’d be doing s

omething else with it.”

Wright is no longer grooming dogs because she has carpal tunnel syndrome. Even though she still grooms cats, Wright said she is shifting her focus toward educating and training other groomers.

“I’ve taught classes up in Spokane about stress management and excellence in pet grooming … keeping your standards high,” she said. “Hopefully [I can] help other groomers get out of that mindset of stress and ‘I have to be working 12 hours a day to make ends meet.’”

Wright said she loves her staff and that she enjoys the freedom that comes with owning her own salon.

Williams joined the grooming team at Amber’s because he wanted to work with dogs and it was an opportunity for him to develop his artistic side, he said.

“My favorite part would be seeing the change in the dogs,” Williams said. “You get a little pup who comes in and they’re a little shaggy and in need of a haircut … you get them freshened up and bubbly and they just look a million times happier.”

The services the salon provides don’t just focus on a pet’s outward appearance, though. Wright said they are holistic pet groomers and that they offer reiki, a calming meditative practice, for the animals that come into the shop.

Groomers at Amber’s have also detected early signs of significant health problems, such as internal bleeding, in the animals they regularly work with.

“We are a part of their healthcare team,” Wright said. “It’s not just grooming.”

Several of Wright’s customers come from Western Washington or fly up from Arizona and bring their pets for a groom when they are in town, she said.

“We’ve had incredible client support,” Wright said. “I’ve been doing this for 13 years and I never experienced that anywhere I worked at.”