WSU sweeps series against Oregon and Oregon State, record attendance in Beasley on Saturday for Klay 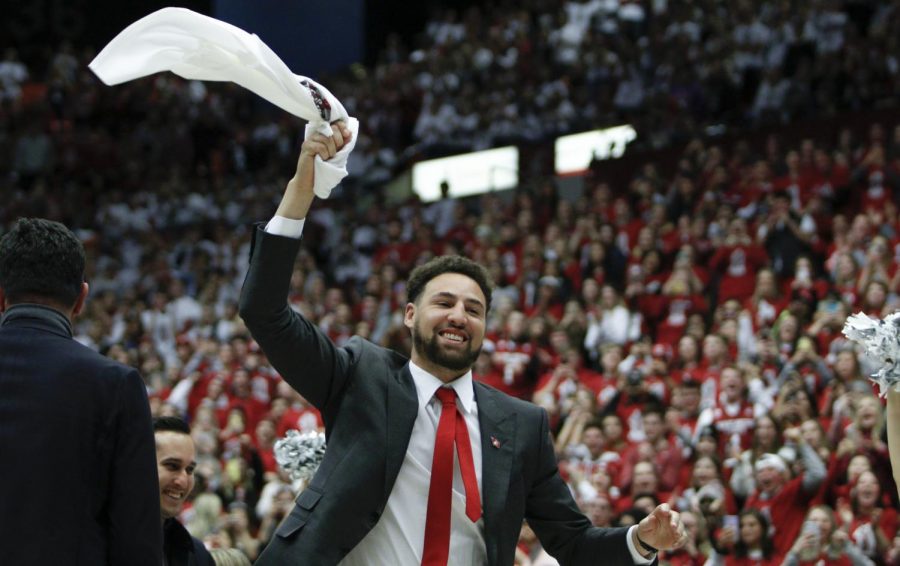 WSU men’s basketball team defeated the Oregon State Beavers 89-76 while honoring basketball alumni Klay Thompson with his jersey retirement. Aside from scoring the most points in a game this season, this win officially stamps WSU with one more win than last season’s record.

The Cougars (12-7, 3-3) already have more wins overall than last year, and it is one win away from matching their conference win total from a season ago.

Junior guard Isaac Bonton led the Cougars against Oregon State (12-6, 2-4) in all statistical categories. He scored a career high 34 points, the highest point total of a Cougar this season, and he is WSU’s first player to score over 30 since Robert Franks Jr. last season against the Beavers on Mar. 9.

Bonton added a career high 8 assists, he also grabbed 8 rebounds and shot 14 of 14 from the free throw line. After playing 39 minutes against Oregon State, he said his mindset was the same as any other game.

“I’ve been watching a lot of film,” Bonton said. “Did the important things first: defend and rebound. Then let the game come to me.”

Both teams started this game with back-and-forth scoring as there were four lead changes in the first 10 minutes. A pair of highlight inside finishes from freshman guard Noah Williams forced the crowd and Thompson to erupt with excitement early in the game.

Oregon State held a lead for over 13 minutes in the first half. Thompson and Curry, sitting courtside, stood up and cheered for almost every basket that WSU scored during the half.

WSU took the lead with 1:08 left in the half and led 46-40 after a buzzer beating 3-pointer from Bonton.

Thompson was honored for his career at WSU during halftime. A heartfelt speech from Thompson made the crowd roar with appreciation. He thanked his family, his teammates, his coaches and Cougar fans all around the world.

“I will always be a Coug,” Thompson said during his speech. “There is nowhere like Pullman.”

Thompson visited with the Cougars during practice Friday and told them to embrace their time in the college atmosphere and try to live in the present.

“I miss being a student, and that’s what I told these guys,” Thompson said. “Just enjoy these moments, try and immerse yourself in your city and your team, and try to be as present as you can.”

WSU started the first 10 minutes of the second by hanging onto the single-digit lead with which they ended the first half. Thompson honored WSU all-time leading women’s basketball scorer redshirt senior forward Borislava Hristova and joined the Pac-12 broadcast desk as well.

A behind the back pass from Bonton to Elleby on the fast break pushed the Cougars to a double-digit lead with a little over four minutes left in the game. WSU led by double-digits for the remainder of the game.

As the buzzer sounded, WSU came out with a victory against Oregon State. Thompson came out to celebrate with the team, posed with them in front of the retired jersey banner and handed Bonton the game ball.

Sophomore forward CJ Elleby had 22 points of his own against the Beavers. In the post-game press conference, he and Williams praised Bonton for his performance over their own.

“It’s fun to watch him, but it’s more fun to be his teammate,” Elleby said. “Just to be able to have that kind of teammate who can put that kind of pressure on the defense, I’d take us any game.”

“It’s great to see one of your teammates heat up,” Williams said. “I told him after the game that he was pulling threes from ‘Klay range.’”

Head coach Kyle Smith, in his WSU post-game press conference, said Bonton’s early struggles this season did not affect the Cougars’ belief in his abilities to score.

“Analytically in practice, he was our top guy. I said, ‘That guy gets some extra rope to try and figure it out,’” Smith said. “Today was a nice reward. Let’s see if he can keep it going.”

WSU hits the road to Boulder, Colorado, and takes on the No. 23 University of Colorado Buffaloes at 7 p.m. on Thursday at the CU Event Center. The game will air on Pac-12 Networks.