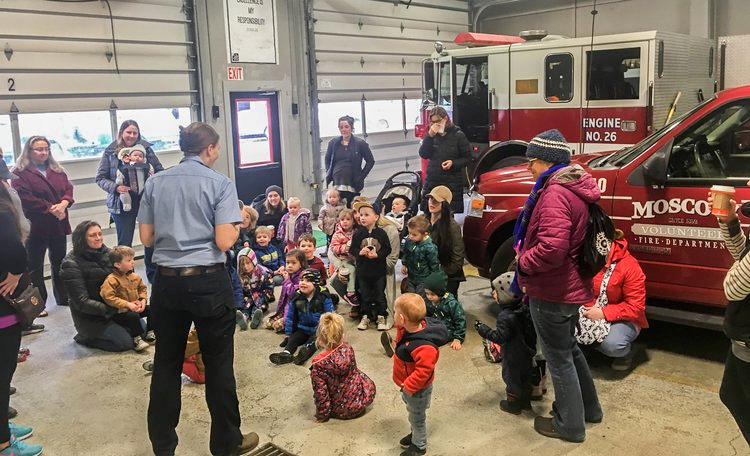 Moscow children vist the Moscow Fire Station as part of a field trip hosted by the Co-op Kids series.

The Co-op Kids program meets every Tuesday to provide families a chance to create crafts, taste new food and go on field trips for free.

“We wanted to make sure that we had events and activities that were appropriate for families, especially families with children,” Max Newland, Moscow Food Co-op education and events coordinator, said.

The program is targeted for children ages 3 to 5 years old, Newland said.

Melissa Snow, Moscow Food Co-op volunteer, brought her young children to the Co-op Kids program as a chance to catch up with other parents. When one of the volunteers decided it was time to take a break, Snow started to volunteer to provide other parents with the same community-building experience.

Snow has two programs planned for the rest of January. The kids will cut snowflakes out of magazine pages on Tuesday, she said.

“It’s fun to do crafts that people don’t normally do at home, but they could if they wanted to,” Snow said.

Newland said Tuesday, Jan. 28 includes a tasting event that features warm winter foods. The snacks will be things the parents and kids can easily make together at home. The food will be allergen-friendly.

Snow said the produce manager gives the children a tour of the produce section the last Tuesday of the month.

Newland said children can also go on a field trip once a month. Previously, the program visited the Moscow Fire Station.

Snow said the program provides a time for children to express creativity while parents sit in the deli seating in the Co-op and have a free cup of coffee.

“It’s a nice way to get out of your house when your kids are driving you nuts and you can just go do something and talk to adults,” she said.

The Co-op Kids Program has about seven to 12 families attend each week, Newland said.

“We want people to try new things,” he said. “A lot of the time for moms, dads and parents they can get caught up with other moms and dads who may be feeling shut in with the youngsters on days like this.”

The Co-op Kids program runs from 9-10 a.m. every Tuesday morning at the Moscow Food Co-Op.