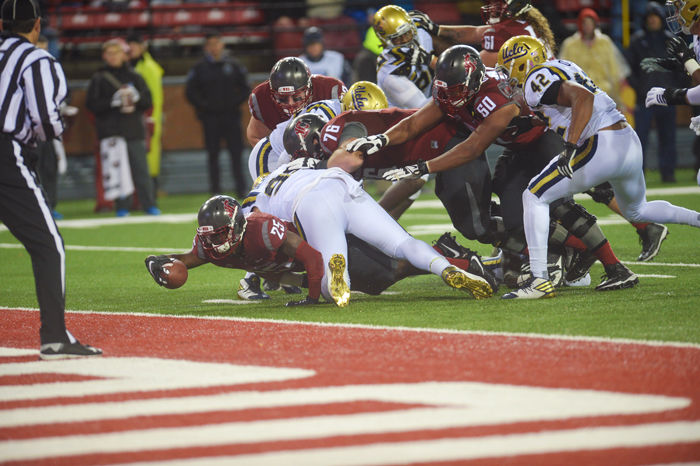 WSU running back Jamal Morrow reaches for a touchdown against the UCLA Bruins. The Cougs will travel to Tempe, Arizona to play the Arizona State Sun Devils on Saturday.

The WSU football team battled rain, wind and the University of California, Los Angeles on Saturday night in Martin Stadium and was able to pull off a victory.

“It’s always fun playing in the rain,” said junior cornerback Marcellus Pippins. “That’s when stars shine and you see what your team is really about.”

The team netted 95 rushing yards and 261 passing yards, both of which are well below average, but were able to hold off a late UCLA charge and seal the victory.

Scoring was at a season low for the Cougs, only putting up 27 points. Apart from a controversial incompletion call in the end zone, the Cougs were unable to find the end zone through the air for the first time this season.

The touchdowns came from the pair of redshirt junior running backs Jamal Morrow and Gerard Wicks.

“(The lack of passing touchdowns) shows we can do it other ways,” said redshirt junior quarterback Luke Falk.

UCLA was without its starting quarterback, but the backup—redshirt senior Mike Fafaul—threw for 258 yards and was able to keep his team in the game, accounting for all three UCLA touchdowns.

The WSU defense was once again a huge factor in the game. They held a trio of explosive UCLA running backs to just 43 yards rushing on 25 attempts, forcing four turnovers including a game-winning interception in just under 40 seconds to play.

“We need to get four turnovers every game or we are not satisfied,” Pippins said. “We got our four, so we met our quota.”

The game was sloppy early on, with neither team reaching 100 yards in the 1st quarter. Both teams only managed single-digit rushing yards throughout the 1st quarter. The lone score of the quarter came on a 36-yard field goal by redshirt junior kicker Erik Powell, his first of the season.

The second quarter was slightly cleaner, with both offenses beginning to find their groove. WSU shot up to 182 total yards in the half, finding its way into the end zone on a 1-yard rush from Wicks. UCLA found their way to 100 yards on the dot, but was still unable to put points on the board.

The Cougars took a 10-point lead into the locker room, and would get the ball to start the second half.

“We tried to make too much happen early, then we got in sync and marched up and down the field,” Head Coach Mike Leach said of the offense’s early performance.

The third quarter provided much more excitement for the fans, as UCLA scored early in the second half, taking advantage of the field position after a controversial fumble from Falk. From there on out, WSU controlled the game, adding 14 points on two rushing touchdowns.

UCLA was able to open the fourth quarter with a persistent scoring drive that fought through multiple third and long situations to pull within 10 of the Cougars.

The Cougars were then able to take the ball and engineer a 15-play, 57-yard drive that took six minutes and 28 seconds. The drive put the Cougars up by 13 with just over five minutes left in the game.

The Bruins did not roll over after the late WSU score. UCLA struck back, going 60 yards on six plays in under a minute and a half of game time.

The Cougs sputtered on their next drive, giving the ball back to UCLA after a less than one minute drive. The Bruins looked to drive 70 yards to take the lead, but the WSU defense forced a fumble with around two minutes and forty seconds to play to get the ball back on the UCLA 43.

After a good punt from sophomore wide receiver Kyle Sweet pinned the Bruins at their own two-yard line, redshirt junior safety Charleston White intercepted a high pass from Fafaul to ice the game for the Cougs, pushing them to their third straight conference win, and fourth straight win overall.

“I was proud of our guys for sticking in there and playing tough like they did,” Leach said.

After UCLA tried to play head games for most of the night, including warming up on the WSU side of the field and reportedly calling out the WSU snap count on defense, WSU won its second consecutive game against the Bruins.

WSU looks to continue their winning streak as they travel to Tempe, Arizona, to take on the Arizona State Sun Devils at 7 p.m. on Saturday.