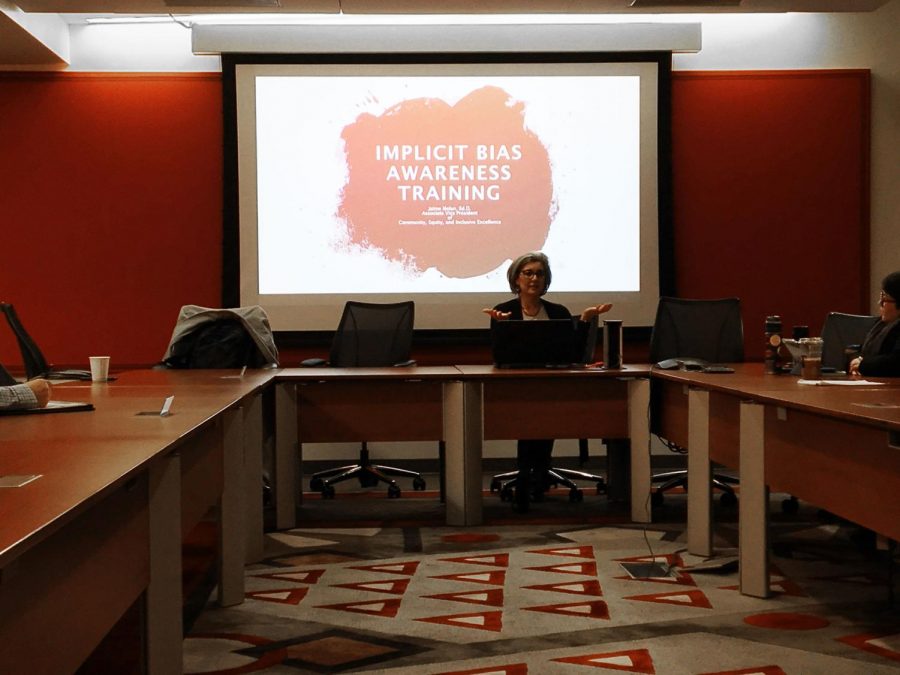 Jaime Nolan, WSU associate vice president of community, equity, and inclusive excellence in the division of student affairs, speaks about the value of engaging with implicit bias.

Nolan said the session was meant for students focusing on a faculty search and the information presented mirrors that in the faculty training.

She said the purpose is to identify people’s own bias and understand what implicit bias is.

The session began with a TED talk titled “The Danger of a Single Story” by Chimamanda Ngozi Adichie.

“A single story might inform how you see somebody or a situation might also be part of implicit bias,” Nolan said.

She said a single story can reinforce stereotypes about a community and lead to misrepresentation.

Nolan said as a search committee it is important to identify “baggage terms” when evaluating candidates. These terms refer to a person’s race, ethnicity, gender, schooling or any social characteristic that affects how they are evaluated.

Matthew Jeffries, director of the Gender Identity/Expression and Sexual Orientation Resource Center, said it is important to not pass over people who can improve services because of one’s implicit bias.

Jeffries said it is important to make sure people on search committees do not automatically gravitate toward someone who is typically seen in a role.

Nolan said people should hold others and themselves accountable through strategies such as having a conversation about the implicit bias people may have.

She said people should unpack terms, make agreements with others and decide as a group a way to handle decisions when on a search committee or any situation involving decisions.

Nolan said not everyone is perfect but people must be mindful of their bias.

“I know from my own work towards being humble in this work, having cultural humility is important,” she said. “It’s a practice.”

Nolan said the more discussions people have about implicit bias, the more they can change how people think of it.

She said culture will change over time when everyone is involved in the work, which is ongoing.