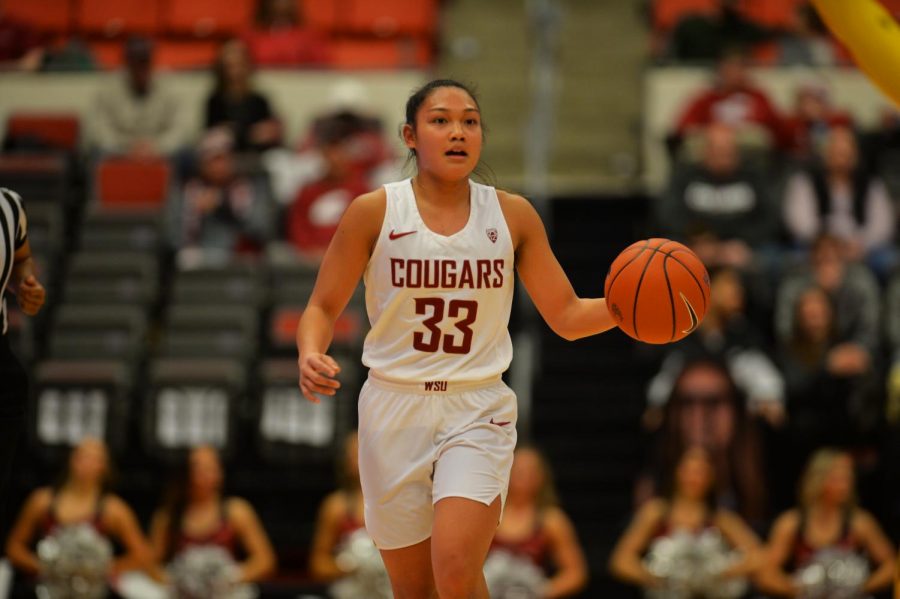 Then-Freshman guard Cherilyn Molina dibbles the ball down the court on March 3 at Beasley Coliseum.

The WSU women’s basketball team will travel to Los Angeles this weekend to face off against No. 10 UCLA at noon on Sunday.

The Cougars (9-9, 2-4) will play the University of Southern California tonight at 7 p.m.

WSU has yet to defeat a ranked club as it is 0-7 against the nation’s top teams.

The matchup against UCLA (16-1, 5-1) presents the eighth opportunity of the season to get in the win column versus an opponent in the AP top 25.

UCLA is coming off their first loss of the season on Jan. 17 against USC when they fell short in double overtime, 70-68.

Senior guard Chanelle Molina, who has scored 97 combined points over her last five games, said the matchup is crucial, and one of the keys to the game will be taking care of the ball.

“Ball security is the key,” she said. “They are lengthy and athletic, so staying poised and under control will be crucial.”

Molina has started every game for the Cougars this year while playing an average of 35.5 minutes per game. When it comes to fatigue, she laughed and said she never gets tired.

Jovana Subasic, a redshirt junior forward from Sabac, Serbia, said getting big wins is important, and a win over UCLA would be valuable to the team.

“It’d be huge,” Subasic said. “They are a ranked club, and we tend to come up short versus ranked teams. Most of our losses have come at the hands of ranked teams. A win against UCLA on the road would be huge for this team.”

The game against UCLA tips off at noon Sunday in the Pauley Pavilion in Los Angeles.