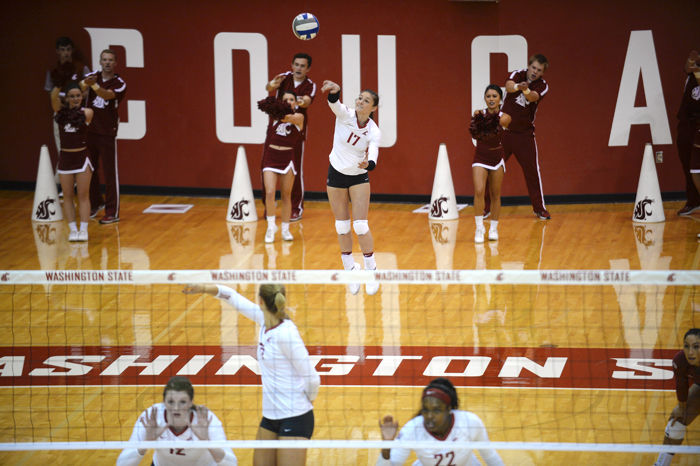 WSU volleyball looks to rebound after picking up its third straight loss.

“The Pac-12 is always tough, and it doesn’t matter who you’re playing,” said Head Couch Jen Greeny. “If you’re at home, on the road, it’s going to be tough. I think we need to learn to get better mentally.”

“Be more aggressive, stay aggressive consistently throughout. Just knowing that every team, every single night, is going to be giving us their best shot, and we have to learn how to deal with that.”

Senior outside hitter Kyra Holt, however, did not let down her team in the game against Utah. Holt had 21 kills, three blocks, and a match-high of three serving aces. She was followed by sophomore outside hitter McKenna Woodford, who had nine kills and four blocks. Fellow sophomore middle blocker Claire Martin stepped up her hitting game with seven kills, and carried her team with nine blocks.

Sophomore middle blocker Taylor Mims contributed seven kills, four of which were done within the first set and a .800 hitting percentage, making her lead hitter in the first set. Mims also had seven blocks while junior outside hitter Casey Schoenlein matched her hitting with seven kills and four blocks. Freshman libero Alexis Dirige led the match with 19 digs.

WSU won the block battle against Utah with 17 total team blocks to their 14, a battle the Cougs have won consistently this season.

The Utes out-hit the Cougs, clocking in 62 kills compared to WSU’s 53. In the fifth set, the Cougs’ usual offensive aggressiveness was nowhere to be seen, playing with mostly tips and scrap in the game to 15, the most probable reason behind the loss.

“I thought Utah did an exceptional job; played some great defense. They blocked really well at times too,” Greeny said. “We just need to be better all-around, be more consistent. I know we’ve been talking about that.

“I thought Kyra Holt played a great match, but we need to have more going offensively than just her. We have to find a way to get the other hitters to terminate the ball. We passed better than I think we’ve passed, and just made too many errors offensively.”