Peace possible between US, China 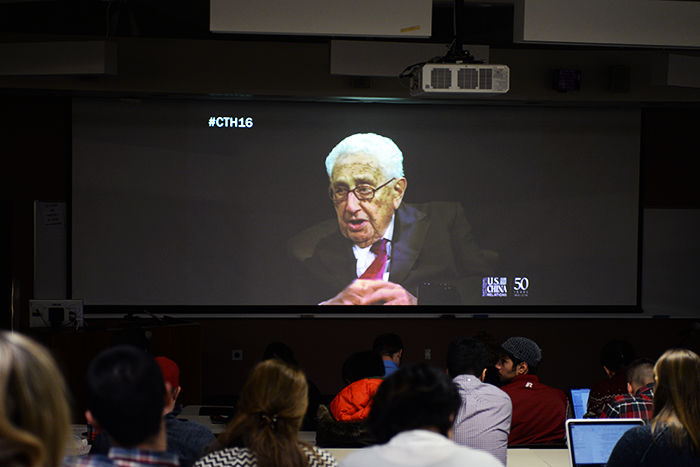 Henry Kissinger, former Secretary of State, spoke over livestream to WSU students on Tuesday, where he discussed America’s relationship with China.

Former national security adviser and ambassador Henry Kissinger said during a CHINA town hall on Tuesday that foolish statements about China should not be dismissed as “campaign rhetoric.”

Kissinger was the 56th Secretary of State, national security adviser and the American ambassador who played a large role in U.S.-China diplomacy during the Nixon administration.

In 1972, Kissinger helped arrange President Nixon’s visit to China, which helped establish a strong relationship between the two countries.

“If you look at the relationship between China and the U.S. since 1971,” he said, “it is the most consistent American policy.”

In reference to Republican presidential nominee Donald Trump’s recent comments, he said the “allowance of Japan and Korea to obtain nuclear weapons … would have a dramatic effect, which will truly increase the level of competition,” an outcome, he said, “we should be very eager to avoid.”

Kissinger also acknowledged that either country had its own shortcomings to overcome in maintaining strong ties.

“China should not be acting in a position of strength,” Kissinger said, “and U.S should not act like we are teaching them how to behave. Not every problem in the world can be solved by the United States alone. Each country needs to know what its national interests are, without lectures from the United States.”

His conversation with Stephen Orlins was streamed as part of the National Committee on U.S. China Relations’ CHINA Town Hall, held at WSU and 80 other venues across 41 states, with several in China and Hong Kong as well.

In addition to the live stream, each venue had its own local speaker. For WSU, Richard Ellings, president of the National Bureau of Asian Research and affiliate professor at UW, spoke after the live stream.

According to Ellings, journalists and academics try to put into perspective the rise of Chinese power. He pointed to conflict following the industrialization and an increase in nationalism in countries such as Germany, Japan and even the U.S., referencing events such as World War II and the U.S. Civil War.

“The history of rising power always results in conflict in a major way,” Ellings said. “By many but not all measures, China has a more capable economy. China’s turn over in trade and goods exceeded that of the United States in 2012.”

Kissinger highlighted the untapped potential within U.S.-China diplomacy, in light of routine anti-Chinese rhetoric made by politicians of either political party during the election campaign.

“Every administration, Democrat and Republican,” he said, “knows U.S.-China relations are front and center for peace in the world. Our relations with China, if you consider all the interactions, are not so bad. Problems are inherent.”