Jennifer Johnson succeeds Ralph Chikhany after he stepped down in December 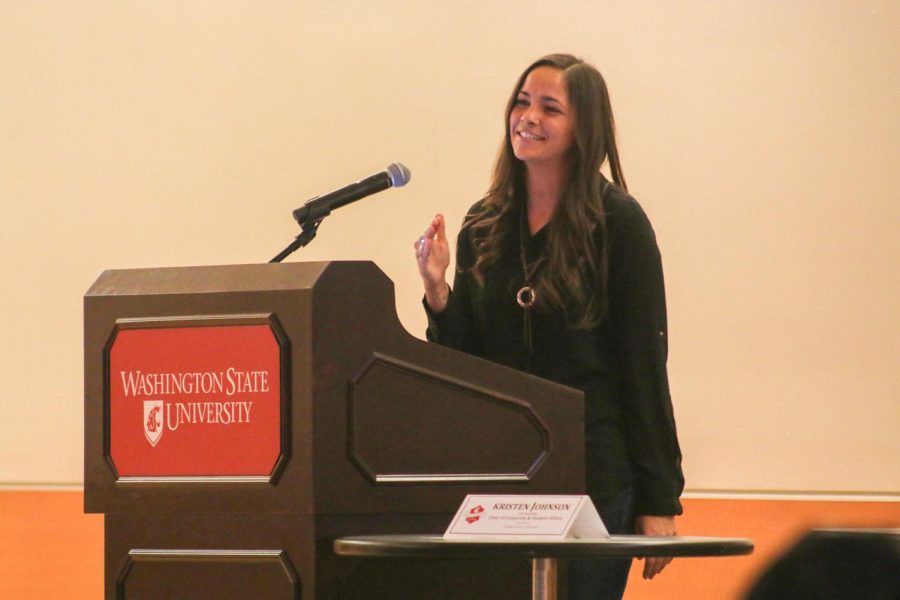 Community Affairs Chair Jennifer Johnson is unanimously voted in as the new GPSA President on Monday in the CUB Ballroom. She has been a member of GPSA for four years.

GPSA senators voted unanimously to confirm a new president during a meeting Jan. 27.

The special nomination committee nominated WSU doctoral candidate Jennifer Johnson for the position. The committee formed in December after former GPSA president Ralph Chikhany stepped down due to personal reasons.

Applications were open to all graduate and professional students at WSU. The committee reviewed three applications at the beginning of January.

“It has been an intense couple months for us at GPSA,” Johnson said.

Johnson joined GPSA as a senator four years ago. She served on several GPSA committees including student affairs.

Selection Committee Member Vishnutej Ellur said the committee chose Johnson because of her GPSA background. He said Johnson will not need training for her position as president.

“She’s someone who understands and knows GPSA well,” Ellur said.

Johnson said she hopes to tackle several projects as president, such as increasing the graduate and professional student stipend. She also said she will work to increase funding for the childcare center on campus.

“It’s such a small area to find childcare,” she said. “GPSA tries to subsidize some of those costs.”

Johnson said she also wants to address the lighting issue on campus. She said the lack of light can cause students to feel unsafe or slip on ice.

After confirming the new president, Access Center Adviser Davi Kallman requested funding from GPSA for the 3rd annual Disability Awareness Symposium. The symposium will be held from April 6 to April 10.

Kameryn Jadoo, Access Center student intern, said the symposium will include a speech from keynote speaker Wesley Hamilton who appeared on an episode of Netflix’s “Queer Eye.” The event will also include inclusive fitness classes and movie showings.

“We want to promote diversity across all campuses and spread awareness of the types of accommodations,” Kallman said.

She said the Access Center makes accommodations for about 1,500 students. Around 1,000 of those students have invisible disabilities such as chronic illnesses, learning disabilities or attention deficit disorder, Kallman said.

“That does not mean that they are the only students with disabilities on campus,” Kallman said. “There’s a stigma associated with getting accommodations and people cannot afford these diagnostic tests.”

The symposium is currently in need of $5,000 to reach its funding goal, she said. The senators will decide if GPSA will help fund the event during the next meeting.