Roddy and T-Rich return to lineups 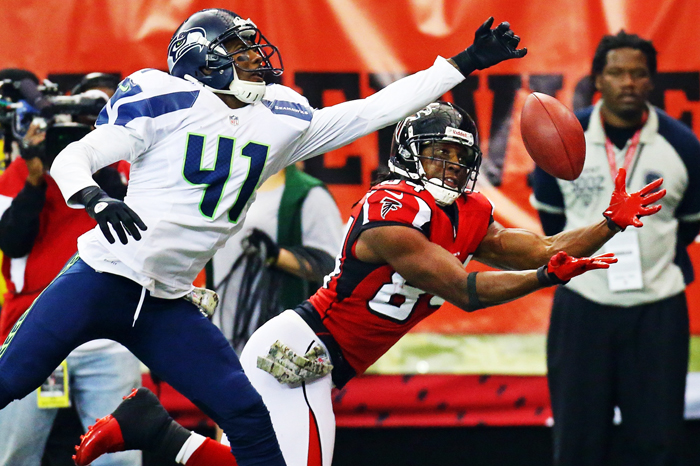 Atlanta Falcons wide receiver Roddy White attempts to catch a pass against a Seattle Seahawks defender during a home game against Seattle, Nov. 10, 2013.

T-Rich is up there with Ray Rice as one of this year’s biggest fantasy disappointments. Many expected big things from Trent after he was traded to Indy, but his success in Cleveland last season hasn’t materialized for the Colts so far. That might change Thursday as the Colts take on a Tennessee team that just handed Jacksonville its first win of the season and that has allowed at least two rushing touchdowns in four consecutive games.

Amendola is coming off of his biggest game of the season before the bye week against the Steelers. This week won’t be so generous for Amendola as the Patriots head to Carolina to take on the Panthers, who haven’t allowed a receiving touchdown to an opposing wide-out since Week 2. Opportunities might be thin for Amendola.

The veteran caught just one pass on four targets in his return to action against the Legion of Boom last week. However, he was in on 55 of 58 snaps last Sunday without any setbacks. Atlanta will take on Tampa Bay on Sunday. Although the Bucs have been playing well lately, winning their first game of the season Monday night, Roddy will likely find the end zone for the first time this season, as the Bucs have allowed at least two touchdowns to opposing wide-outs in back-to-back games.

Kaep is coming off of an awful performance in an ugly 10-9 loss to Carolina on Sunday, and that was within the cozy confines of Candlestick Park. This week San Francisco travels to the NFC South to take on the Saints, who just drubbed the Cowboys on Sunday night, holding Tony Romo under ten fantasy points (ESPN standard scoring). There are better options this week.

Sleeper alert: Sanders has been a middle-of-the-road bench guy on most fantasy teams and is still riding the waiver wire in about 20 percent of ESPN leagues. Aside from last week, Roethlisberger has quietly targeted Sanders this season (he was targeted 22 times over the two games before last week) and while the yardage and touchdowns haven’t shown up, the volume is there. This week the Steelers take on Detroit, whose shaky secondary has allowed seven touchdowns to opposing wide-outs over its last three tilts.