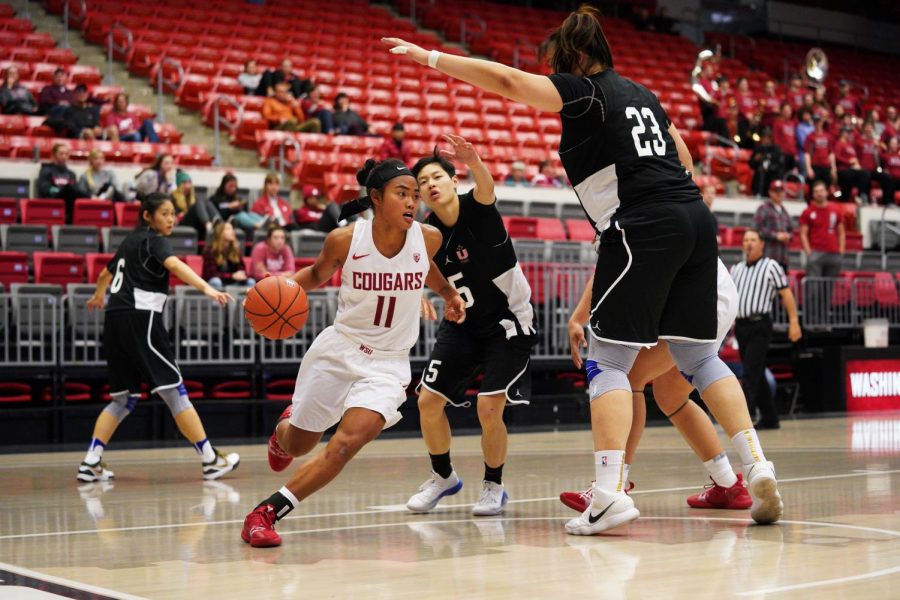 The WSU
women’s basketball team hosts the No. 6 Stanford Cardinal at noon Sunday in
Beasley Coliseum in search of its first ever victory over that program in the
school’s history.

Senior
forward and WSU basketball leading scorer Borislava Hristova said she
understands this is her last chance to beat Stanford in her collegiate career.

“Our
record against Stanford is something like 65 to nothing,” Hristova said. “So,
we have never beaten Stanford, and it’s about time to do that. It’s my last
chance to do this and they are a great team. We have to stay poised, run our
offense and play great defense.”

The
Cougars are in the midst of a four-game losing streak, which the average margin
of defeat is 10.75 points per loss.

“It’s
hard to lose so many games in a row,” Hristova said. “It’s the best conference
in the country so every game is going to be a challenge. Stanford is coming to
town with the intention of beating us, and we can’t back down. We must take
care of the basketball.”

Stanford’s
win streak was extended to three as they defeated the Utah Utes 82-49 at home on
Sunday. Freshman forward Francesca Belibi led the Cardinal in scoring with a
career-high 20 points.

The
Cardinal has three players averaging in double-figures leading to a different
name being the leading force each game. There has been a different leading
scorer in each of the last three games.

Sophomore
guard Lexie Hull has been the leader for the Cardinal this season. She is
averaging 13.3 points per game while contributing 5.9 rebounds per game as
well.

Hristova
said there is no concern for the Cougars about the mindset this team has at the
moment.

“We
stay positive and we know we can do this,” she said. “There has been so many
close games that we have missed out on that it keeps us positive that we can
take down the nation’s top talent.”

Hristova
has had an accomplished career in Pullman as a Cougar and has had some unforgettable
games. She said she hopes her favorite game has yet to occur.

“I hope
this moment has yet to come,” she said. “Picking my favorite game as a Cougar
is difficult, but hopefully the decision is easy after Sunday.”

The
game against Stanford tips off noon Sunday in Beasley Coliseum.