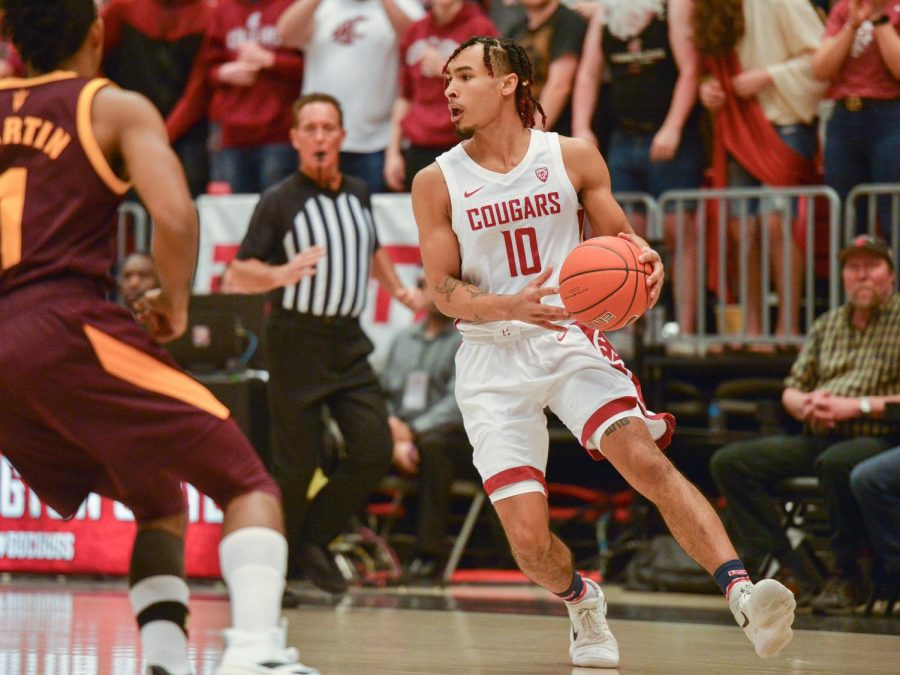 Junior guard Isaac Bonton looks to make a move against Arizona State on Jan. 29 at Beasley Coliseum. The Cougars won the game 67-65.

The Ducks remain on top of the conference despite seeing
their four-game winning streak come to an end. They won a surprisingly close
game against California on Thursday before getting upset by the Cardinal on
Saturday. Senior guard Payton Pritchard played like the superstar he is in both
games. He scored 21 points against California and 16 points against Stanford
along with breaking the school record for assists over the weekend.

The Buffaloes split their pair of games over the weekend.
They started out with a close loss to UCLA but followed that up with a blowout
win over USC two days later. Their win against the Trojans was a great team
win; they had four players score in double-digits, led by junior guard Tyler
Bey with 16 points.

The Wildcats were one of two teams to win both of their
games over the weekend. They started off with a win over the Huskies in a game
that came down to the wire. Their leading scorer was sophomore Jemarl Baker Jr.
with 17 points off the bench, including the go-ahead 3-pointer with less than a
minute to go. Their next game against the Cougars was not as close. They took
the lead with eight minutes left in the first half and never trailed the
remainder of the game.

Another team that split its weekend games, Stanford got
one of its biggest wins of the season against Oregon. The Cardinal’s upset over
the Ducks was the perfect way to rebound after its 68-63 loss to Oregon State.
Junior forward Oscar da Silva led the way in the upset win with a 27 point, 15
rebound double-double, a nice follow-up to his 22 points in the loss to the
Beavers.

The Trojans played a tough contest against Utah in the
first game of the weekend. They were led by senior forward Nick Rakocevic who
gave USC the lead with 20 seconds left as he scored the last of his 16 points.
The Trojans followed that up with a dud against Colorado as the Buffaloes handled
them fairly easy. No Trojan was able to score more than 12 points, and their
starting five accounted for 38 points.

The Bruins joined the Wildcats as the only teams to get
weekend sweeps when they beat Utah on Sunday. Their more impressive win came
four days earlier when they beat Colorado behind 30 points from junior guard
Chris Smith. He could not repeat his performance against the Utes where he only
scored six points but freshman guard Tyger Campbell picked up the slack with 22
points and eight assists.

The Cougars notched another thrilling home victory when
sophomore forward CJ Elleby hit a 3-pointer with four seconds left to beat
Arizona State. Elleby tied his season-high in points with 27; the fourth time
this season he has hit that mark. The Cougars cooled off against Arizona and
played one of their worst games of the season. The only player to score in
double-digits was junior guard Isaac Bonton with 15 points, who needed 16 shots
to get there.

The Sun Devils were one Elleby 3-pointer away from a
sweep of the Washington schools over the weekend. They played two competitive
games; both games were decided by a combined six points. Junior forward Romello
White led the Sun Devils with 15 points and 11 rebounds against the Cougars and
was one of the four players to score at least 18 points in their win over the
Huskies.

The Golden Bears continue to rack up conference wins
despite having the worst overall record in the Pac-12. They fell short against
Oregon despite 25 points from sophomore guard Matt Bradley. California fared
better against the Beavers as they escaped with a two-point win. Bradley
continued his hot streak with 23 points in their win.

The Beavers had a confusing week. They beat Stanford, one
of the best teams in the conference, but lost to California, the team with the
worst record. The Beavers were led by freshman guard Jarod Lucas who provided
21 points off the bench in their win against the Cardinal. That mark was a
career-high for Lucas who is averaging 3.9 points on the season. Senior forward
Tres Tinkle led the way with 19 points in the loss to California as the Beavers
failed to capitalize on their momentum from downing Stanford.

The Utes lost both of their games over the weekend,
starting with a low-scoring defeat at the hands of the Trojans. Four of the
starters scored in double-digits but their leading scorer, sophomore forward
Timmy Allen, scored 13 points. Their loss to the Bruins was less competitive
and once again the starters were consistent but not great. Nobody scored more
than sophomore forward Riley Battin’s 14 points, and Allen scored 13 points
again.

A team many expected to be competing for the Pac-12
championship finds itself at the bottom of the conference standings. The
Huskies lost to both Arizona schools, totaling their fourth and fifth
consecutive conference losses. They were in the game until the very end against
the Wildcats but fell just short in the 75-72 contest. They played another
close game against the Sun Devils but once again fell just short. All five of
the Husky starters scored in double-digits, led by freshman guard Marcus
Tsohonis with 19 points.