While making inclusivity statements might be a first step, there needs to be more 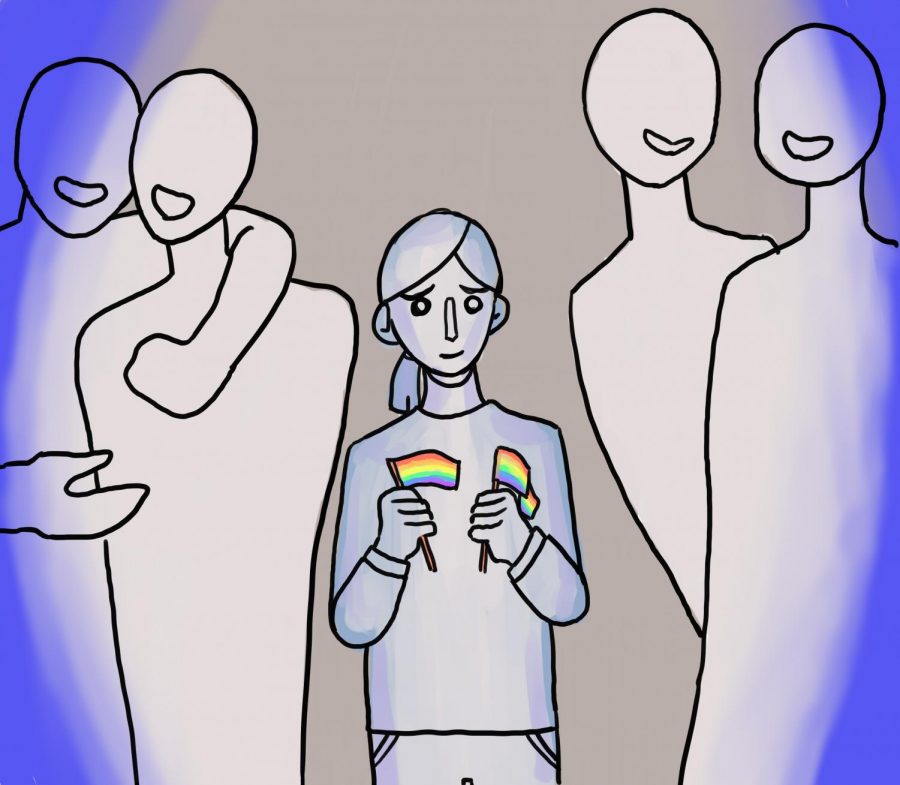 It isn't easy being LGBTQ and in Greek life, therefore steps need to be taken for Greeks to be more mindful about the words they use and how they act to become a better place for all.

Washington State may be progressive, but the fraternities on campus are not immune to homophobic controversy. Walk through Greek row on weekend night and you will hear the word “f*g” more than you probably should. Chapters may have different bylaws condemning these ideologies.

Phi Kappa Sigma fraternity, who’s national bylaws explicitly state,
transgender people have been, and will continue to be, valuable members of our fraternity.

This bylaw was introduced on the national level to PKS in 2018. However, 17 of the 27 fraternities on our campus have no bylaw stating anything for or against LGBTQ inclusivity in their chapters. This does not mean they can reject members due to identity, it just means there is no national policy.

Andrew Thomas, IFC public relations director, said that speech is protected
under our constitution, but if there is a clear and present danger, action will
be taken by IFC.

If a member of a chapter is caught participating in hate speech towards the
LGBTQ group, it will be treated like any other hate speech, and they will be
sitting in front of Greek standards on a Sunday.

Thomas said the IFC has just created a new position: director of diversity,
equity and inclusion.

Sororities on campus, although stereotypically more accepting, are not
exempt from discrimination. Sororities have less direct forms of discrimination than the fraternities. It is no secret that rushing is essentially just women judging other women. The idea of rushing can be absolutely terrifying for queer women. They have either lived their lives in the shadows for their safety, or experienced years of negative judgement from their peers.

Willingly attempting to join an organization with a membership process which relies on the type of judgement queer women avoid seems counter intuitive. Out of the 14 sororities on campus, four have no national policy on trans inclusivity. This does not mean that those without national bylaws can’t accept LGBTQ members.

The National Panhellenic Conference states on their website that collegiate
chapters participate in at least one program annually that promotes a climate of diversity and inclusion.

Whether or not they actually participate in said programs at WSU is unknown.

We have more than IFC and NPC on campus, we also have the United Greek
Council, which has recently changed to the Multicultural Greek Council. The MGC is compiled of multicultural sororities and fraternities. There are also co-ed fraternities, which can be a more comfortable option for LGBTQ students. These are separate organizations from the IFC and NPC, and have their own set of rules.

Not a lot of WSU students have a connection to the MGC. This is because
unlike IFC and Panhellenic, they do not own any houses on Greek row. Chapters that belong to the MGC pride themselves on being accepting to all people regardless of sexual orientation, race, ethnicity and gender expression. If formal recruitment for an NPC or IFC chapter seems too scary for certain minority groups, MGC is a great alternative.

“Any LGBTQ+ student experiencing discrimination can certainly come and talk with me,” said Matthew S Jeffries, director of Gender Identity/Expression and Sexual Orientation.

Jeffries said that he would have to report discrimination to the Office of
Civil Rights Compliance. He also said Alternatives to Violence of the Palouse
and Counseling and Psychological services are great, confidential resources.

GIESORC and the Center for Fraternity and Sorority Life hosted a program in the fall together called Being Out on Greek Row.

“This is the second time we have hosted this event and each time we have had several hundred Greek members attend,” Jeffries said.

Culture changes in Greek row are coming in waves. Currently our Greek system is under a safety revamp to prevent serious accidents related to alcohol. Next, it is time to seriously investigate how LGBTQ Greek members can be comfortable and open without fear in their own chapters.

There is clearly a great start with ally trainings between GIESORC and
specific chapters and national bylaws constantly being updated throughout all chapters, not just the ones here at WSU. With IFC introducing the new director of diversity, equity, and inclusion, it is safe to say that Greek row in 10 years will be a safer, more diverse place. And that is exactly what we want.