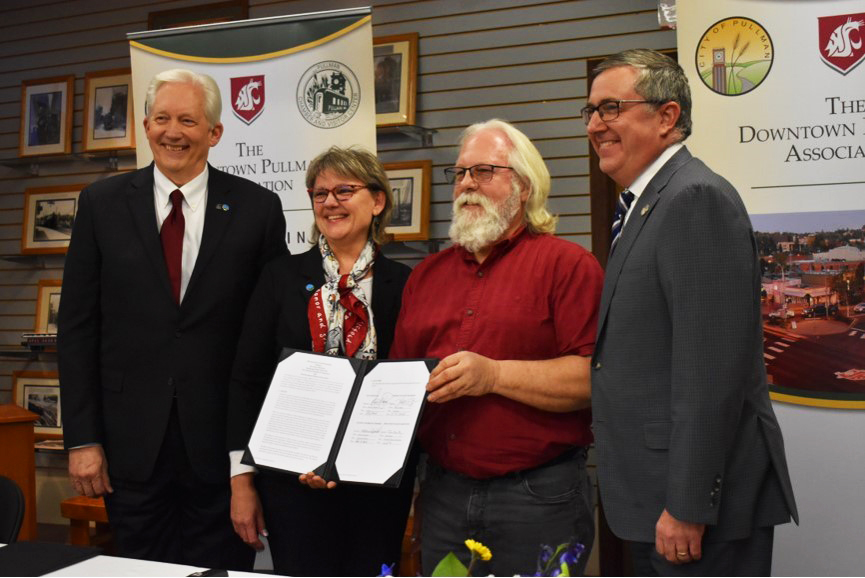 Community and university leaders signed a Memorandum of Understanding on Tuesday at the Historic Pullman Depot and Heritage Center to honor a collaborative effort to improve downtown Pullman.

Jeanne
Weiler, downtown initiative coordinator, said the MOU is an agreement between
WSU, the City of Pullman, and the Chamber
of Commerce. The document acknowledges
the groups’ unity in the revitalization
of downtown Pullman.

Dymkoski said
the city recognized that Schulz’s
arrival in Pullman created an opportunity for Pullman to improve. The city also saw it as a chance for relationships to grow between the
community and the university.

The groups’ collaboration encourages growth, she said.
It gives each entity a forum to
discuss the challenges and opportunities the city has.

“We’re here
today to celebrate the next step in formalizing this agreement to work
together,” Dymkoski said.

Weiler said
Pullman’s master plan is on a “parallel track” with the MOU. The plan is in its
final stages and guides the improvement of downtown Pullman.

The city will use the information from BDS and
build on it to direct how the city will increase economic development in
downtown Pullman, he said.

“It’s no point at this time to say, ‘Ok, we’re
going to go this direction,’ and then the consultant says something else,”
Johnson said.

Weiler said it is the city’s responsibility to
adopt the suggestions and decide whether to fund the recommended improvements.

The Town Gown Collaborative, a joint effort
between the city and university, has helped in this process, Johnson said. The
collaborative consists of various members from the community.

Schulz said it is important for the university to
do various things as a partner to help the community.

A graduate student was hired to interview
business owners and obtain “concrete data” to see what community members think
is important in downtown Pullman, he said.

“Sometimes, we only have people for three or four
years,” Schulz said. “I still want them thinking: ‘If I can ever have that
opportunity to come back, this is where I want to go.’”