New, young players are making impact on team when they play 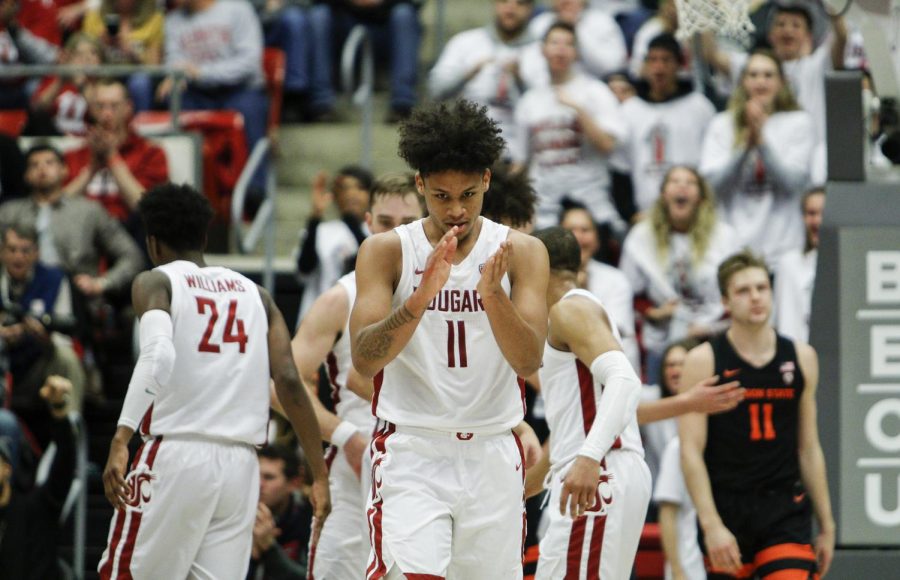 This season has been big for the WSU men’s basketball team.

Sophomore forward CJ Elleby took the next step into superstardom. Junior guard Isaac Bonton played impressively and turned into a household name on the Palouse. Senior forward Jeff Pollard remained one of the most beloved and adored athletes at WSU.

Starters always get the most credit, and rightfully so. They play the most minutes, score the most points and are on the court at the end of the game when it matters most.

However, there is a lot more to this Cougar team than just the seven players that logged a start so far this season. The team had valuable contributions from its bench all season long.

No bench player has been playing out of this world but most of them are inexperienced. There are only five players on this year’s team that wore the crimson and gray last year meaning every other player in new to Pullman. Most of the new players are freshman so they are playing their first college ball ever.

Freshman DJ Rodman may be one of the most unexpected performers for the Cougars this year.

Rodman had zero stars coming out of high school, which he has proved wrong by being a solid contributor off the bench in his first season in Pullman.

He has played 18 games this year, being the first player head coach Kyle Smith has gone to off the bench in six of those games. He has registered the most minutes for a player who has not started a game.

Rodman is proving his ability to impact a game without scoring a bunch of points. He is only averaging two points a game but has helped the team with scoring when he needed to.

The Cougars have won every game in which Rodman has scored at least five points. He had his best game against Oregon when he scored eight points and helped the Cougars pull off the upset.

“DJ’s been, you know, in and out but he’s been good for us, and he had an extended role; he did a good job,” Smith said in a press conference following the game against Oregon.

Rodman has also been one of WSU’s best shooters from 3-point range. He has made nine of his 27 attempts from beyond the arc tying him for the third best 3-point percentage on the team.

The best shooting percentage from three belongs to junior forward Daron Henson. Despite playing in only five games, Henson has shot 56.3 percent from three and has made a 3-pointer in four games.

He has scored in each of the five games he has checked in, including twice hitting double-digits: 12 points against Stanford and 13 points against Colorado.

Henson has been the perfect example of a player that makes the most of his limited minutes.

Another player making the most of his minutes off the bench was junior forward Tony Miller.

Miller came off the bench in all 14 of the games he played in before he got injured and missed the last month.

He was asserting himself as an offensive weapon for the Cougars, scoring in double-digits five times. His 18 points against University of Idaho was not only his season-high but also more points than anybody has scored in a game other than Elleby and Bonton.

Miller was able to score while being effective. He has the highest field goal percentage on the team with 65.5 percent.

Miller’s best all-around game may have been against USC when he had 15 points and 11 rebounds, his only double-double.

“He helps a lot and gets on the boards and good scorer. He just always finds a way to score and rebound and he’s tough and guards,” Smith said in a press conference after the game against USC.

The Cougars’ biggest contributor off the bench has been freshman center Volodymyr Markovetskyy. The 7-foot-1 Ukrainian has been getting more playing time lately, logging 10 and 16 minutes against Arizona State and Arizona respectively.

When Markovetskyy is on the floor he has an impact on both sides of the floor. His size alone makes opposing players worry about him when they drive into the lane.

He has also been able to defend without fouling, something a lot of 7-footers struggle with. He has committed only 17 fouls in 88 minutes played.

Markovetskyy has also chipped in offensively. He is not scoring a lot of points or taking a lot of shots but has been efficient.

He is second on the team in field goal percentage, shooting 63.2 percent despite only scoring 2.1 points per game.

The area when Markovetskyy has been the most impressive has been on the glass. He is averaging 2.2 rebounds per game but is on pace for 12.6 rebounds per 40 minutes.