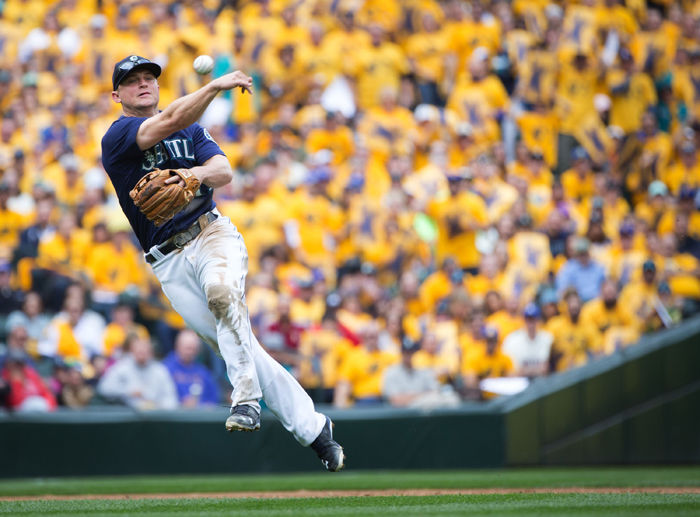 Mariners third baseman Kyle Seager makes an off-balance throw to first in a game at Safeco Field on Sept. 5.

EDITOR’S NOTE: The columnist no longer holds the views expressed in this column and feels the editor at the time did not properly portray his opinion after it went through the editing process.

Similar to last year, the Mariners made a run at the wild card but it was too little too late.

As a loyal M’s fan, I would love to see our team snag one of the two AL wild card spots. The end of the season always reminds me of how much of a disaster the wild card playoff game is.

Taking six months of a team’s work and reducing it down to a one-game playoff defies logic and turns the wild card into a competition to see who has the best ace, not who is the best team.

Baseball’s fickle nature demands at least a five-game series to fully determine the best team. It’s a sport where the worst team in the league can easily beat the best team any given night if they manage to have some hot bats. A one-game wild card is an injustice to the worthy teams that managed to secure a wild card berth.

Unfortunately, the one-game wild card playoff is just the beginning of baseball’s problems.

It’s a game that refuses to evolve and its rigid attitude is starting to slowly diminish its popularity — especially among millennials. Even though baseball players make more money than athletes in any other American sport, its slow decline in popularity is concerning for the game we call America’s pastime.

I believe that if Major League Baseball adapted a few rule changes, it could win the hearts of many who left the sport in favor of more “entertaining” and “exciting” sports like basketball and football.

I remember watching the World Series in my dorm freshman year and I noticed that no one else cared. People were watching the NFL Network during game seven. Baseball is just not considered “cool” anymore.

If the MLB doesn’t want to slowly slip into obscurity, they need to make some serious changes. Baseball needs to become faster and more exciting in order to win back the hearts and minds of my generation and to save the sport from antiquation.

Here are some rule changes I’d like to see implemented:

The mound was lowered to combat pitching dominance after the 1968 season, which was deemed “The Year of the Pitcher.” I think it’s time to lower it again. In a society with a rapidly decreasing attention span, baseball could help itself by bringing more excitement to the game and lowering the mound will result in more runs.

Baseball needs more 7-6 games and less 2-1 pitcher duels. Only hardcore baseball fans find pitching duels interesting. For the rest of us, they are painfully slow and boring.

Move in the fences

If we’re being honest with ourselves, the steroid era was pretty great. Baseball fans were in awe of how many homeruns were hit each season. Baseball had stars that could stand up with basketball and football stars.

Today, baseball lacks name recognition. In the world of social media, baseball’s influence pales in comparison to basketball and football. Moving the fences in 10-20 feet would result in higher scoring and more home runs without sacrificing the integrity of the game.

Casual fans want to see home runs. The fact is that when you go to a game, especially at Safeco, there is a decent chance that you won’t see a single home run. Last year not one player hit 50 home runs. That needs to change.

Speed up the game

Baseball is too long. When there are 162 games a year, with three-plus-hour games, it is just too long for a single game.

Combine this with the fact that baseball is a very slow game and you have a problem. Baseball could easily shorten its games to two hours and 30 minutes by utilizing a pitching clock, similar to a shot clock in basketball, but for the pitcher. This will reduce mound visits, and not allow batters to leave the batter’s box in between pitches for excess time.

This is probably the most important rule change. Baseball games don’t feature enough action to tolerate a batter taking a quick nap between pitches. Society is becoming less and less attentive. I can barely watch a show live anymore because I can’t stand watching a three-minute commercial break.

Baseball is the one sport where we routinely see fans sleeping in the stands. Speed up the pace of the game and you won’t have to give people free fedoras to get people to come to the stadium.

Hopefully, MLB Commissioner Robert Manfred will enact these rule changes sooner rather than later, because baseball’s popularity is dwindling fast. I want The World Series to become conversation-worthy again.