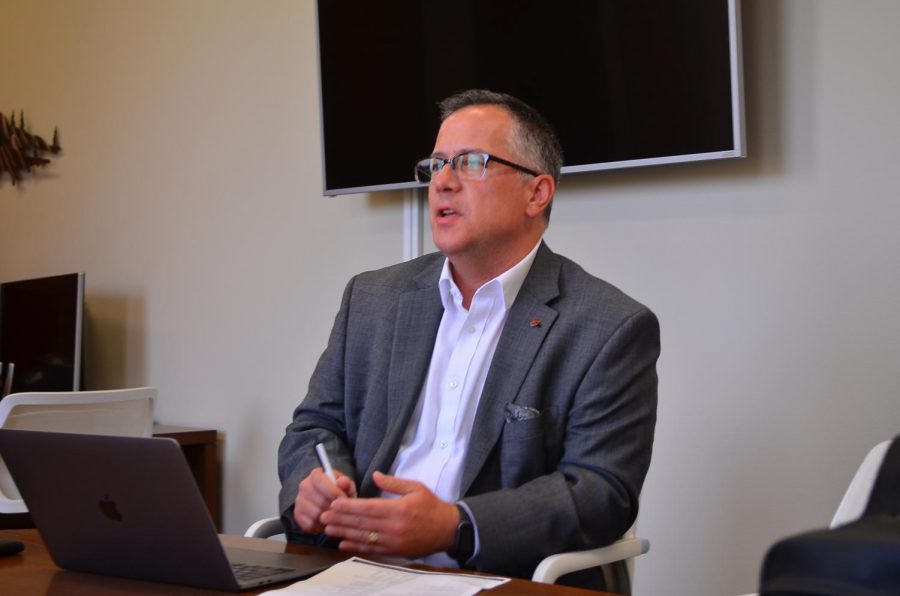 Phil Weiler, WSU vice president of communications says the university changed the way it decides to close down to give people more of a timely notice.

The snowy forecast caused the first cancellation of university operations on Wednesday. However, not everyone was pleased. Members of the Faculty Senate expressed disapproval of the university closure during a meeting on Thursday.

“It’s a little bit bizarre that WSU was closed when Pullman School District ran on time,” Eric Roalson, College of Arts and Sciences senator, said. “They didn’t even have a two-hour delay.” WSU sent an alert notifying students and faculty the university would close on Tuesday evening due to a U.S. National Weather Service winter storm warning. The warning said 5-10 inches of snow was expected to build up on Wednesday morning.

In a meeting with The Daily Evergreen on Tuesday, Phil Weiler, vice president for marketing and communications, said the university changed the way it decides to close.

Previously, the decision was made at 6 a.m. after checking with Facilities Services if campus could be cleared, Weiler said. “Frankly 6 a.m. … [If you live] somewhere far away you may be on the road at 6 a.m. if you’re going to be here by seven or eight to start your day,” he said.

Now the decision will be made the night before based on the forecast, Weiler said.

“The decision to close campus at 5:30 the night before when we know that weather conditions can vary a lot on the Palouse seems to be a major problem,” Roalson said.

Roalson said the closure canceled major exams in his department which would have been given to classes of around 500 students. Many labs taught by graduate student teaching assistants were canceled, and the labs must now be made up, he said.

Weiler said it is important for university leadership to give people plenty of advance notice of university operations. “The downside is we’re going to probably get it wrong more than we have in the past,” Weiler said.

Weiler said the university is not committed to this idea. An after-action report will be conducted to evaluate the best solution going forward.

Olivia Yang, facilities services associate vice president, delivered a presentation regarding the prioritization of repairs to buildings on campus during the senate meeting.

Yang said Facilities Services will determine which projects will be done first by completing an evaluation of learning, research, service, risk management, space and maintenance needs. A scoring committee of 12 people will evaluate the criteria, she said. The committee currently has no members. “What we’re here to do is to get your input on what we don’t know,” she said.

Glen Duncan, Elson S. Floyd College of Medicine senator, said he had concerns with the university’s strategic plan, just like every other strategic plan which has come previously. “It’s just that, it’s a plan,” Duncan said. “What this lacks … is any real substance,” he said.

He said the problem he has with strategic plans is there’s no concrete way of seeing university objectives carried out.

“We already know that we need to increase the hiring and retention of exceptional diverse faculty and staff,” Duncan said. “That’s kind of given, we’ve been talking about that for decades. The more important piece is how are we going to actually do that.”