WSU tennis team serves up aces, bringing home two match wins against Gonzaga University with scores of 4-1 and 7-0 on Saturday 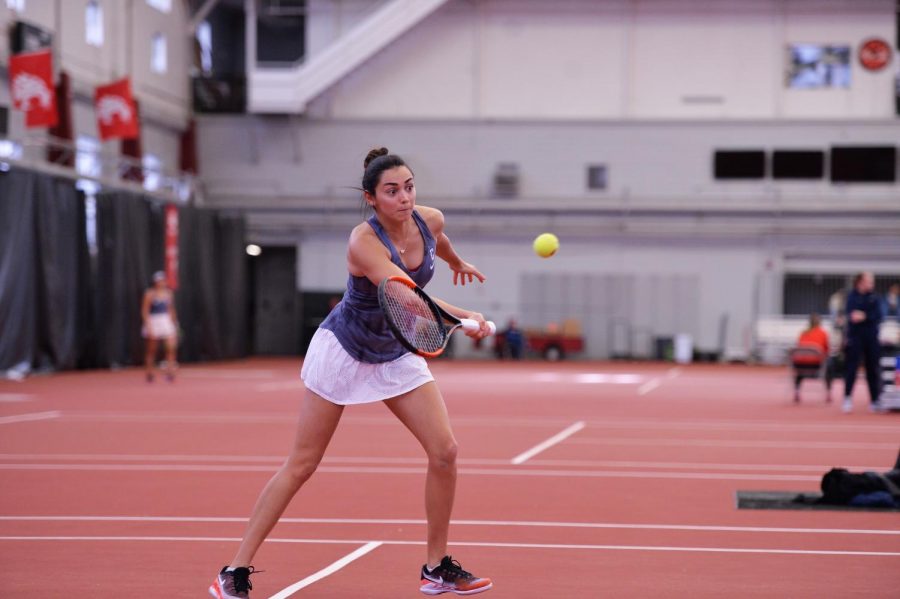 Senior Melisa Ates swings upward at a ball during a match against Gonzaga on Saturday at Hollingberry Fieldhouse.

The two matches were won
by scores of 4-1 and 7-0 in two one-sided affairs. The team was led by junior
Michaela Bayerlova, who won a total of four matches in the two victories.

The team swept in the
doubles category against Gonzaga with two wins and one undecided match. The
doubles matches were won by Bayerlova, sophomore Yang Lee, senior Jovana Knezevic
and freshman Pang Jittakoat.

Bayerlova and senior
Melisa Ates started off the singles category with two quick victories against
their Gonzaga opponents; each winning two straight sets. Lee clinched the
victory after winning her singles match in two straight sets.

The Cougars only loss against the Bulldogs was played by sophomore Savanna Ly-Nguyen in a close, hard fought match.

“Really proud of our players… This is always a really tough team, and I thought we did a good job of coming out strong in the doubles and it helped carry over into the singles,” head coach Lisa Hart said.

Sophomore Hikaru Sato,
Bayerlova, Knezevic and Jittakoat ended doubles matches in the blink of an eye
against Eastern Washington, as they allowed their opponents to win a combined
three games in the three played matches.

Victories from
Bayerlova, Ly-Nguyen, Ates, Sato, Lee and freshman Carla Quadflieg in the
singles matches gave the Cougars another huge victory over another tough
opponent.

The Cougars next match
is against Fresno State on Feb. 20 in Pullman.