The Utah Utes beat the Women’s basketball team on Sunday with a score of 78-66. 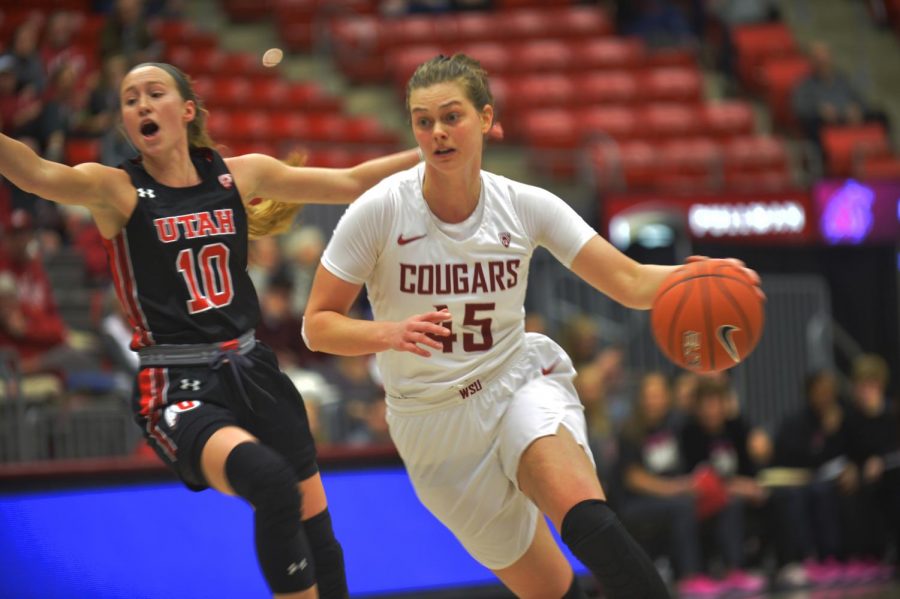 Senior Forward Borislava Hristova sprints past a Utah defender as she goes for a lay up on Sunday evening at Beasley Coliseum.

Sophomore forward Ula Motuga led WSU (11-13, 4-8) with 14 points, tying her season high, and seven rebounds. Junior guard Johanna Muzet contributed 12 points off the bench while shooting five for seven from the field, which ties her season high for points.

The WSU bench contributed
29 points in this game compared to the three points against Colorado on Friday.

“We should of made a change sooner,” head coach Kamie Ethridge said. “We fought fire with fire. Our best lineup involved players off the bench, and we should have adjusted earlier.”

The Cougars trailed
the Utes at the half 46-25 as Maxwell shot four of six and scored 15 points
while connecting on three shots from behind the arc.

“We need to be dialed in way before tip-off,” senior forward Borislava Hristova said. “We have to compete every possession if we want to win games in this conference.”

For the Cougars, Motuga had nine points on four of eight shooting and grabbed five rebounds as well.

The Cougars trailed by as many as 26 in the first half. Utah shot 6 of 10 from the 3-point line while WSU shot three of nine. The free-throw attempts were also lopsided as Utah shot 10 and WSU shot two.

The Cougars will head
to Arizona next weekend to face off against the No. 19 Arizona State University
Sun Devils on Friday and No. 12 University of Arizona Wildcats on Sunday. The
games can be viewed on the Pac-12 Networks.

The Cougars have yet
to defeat a ranked opponent.