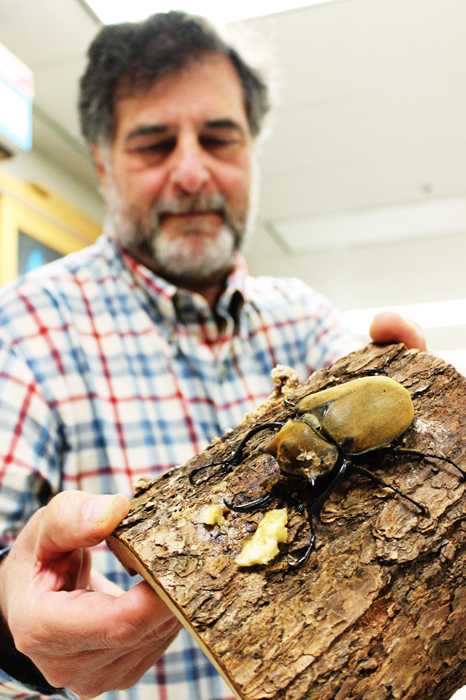 Dr. Richard Zack, an entomology professor at WSU, shows a one-month-old elephant beetle that he recently brought back from an insect research trip to Guatemala, Tuesday, Nov. 5.

Insects are not creepy or gross, said a WSU professor who offers a practical look at the organisms that influence everyday life.

Richard Zack, an entomology professor at WSU, works abroad and at home to help answer questions about peoples’ crawly competitors.

“Insects really are humans’ greatest competitors,” Zack said. “They really are involved in every aspect of our lives, although subtly.”

Zack earned his doctorate in entomology from WSU in 1982 and has taught at the university for the past 15 years. One of the research projects he conducts takes him to Guatemala twice a year to study insect diversity.

“I’ve never had a day that I thought was boring,” Zack said. “There’s always something. There’s a fascination.”

He said his love of people partners with his fascination for the insects that are a part of each community. This curiosity has taken him to the Middle East, Central America and Indonesia.

Zack is captivated by the ways in which human traffic attracts insect activity on the Pacific islands. He and other entomologists use these trade hubs to study species’ origins and how best to stop their numbers from growing. To do so he traces trade routes to learn where insects came from and what they harm.

“In the world of animals, there is still a tremendous amount of information to be discovered about insects,” Zack said.

Zack has published a variety of works on insects and their effects. Alongside colleagues and students, he conducts research on how best to protect plants in Pullman. He said understanding insect biology and exploring predatory or environmental responses could save crops without the use of pesticides.

“Insects are just out there trying to make a living, just like everybody else,” he said.

Despite this view, Zack said insects destroy about one-third of the food people grow for themselves.

“We are in a constant battle to win back what they’re taking from us,” Zack said.

While humans adapt to gain an edge over their critter competitors, the insects adapt, too, he said.

“They do all of these things, that no matter what we do to try to stop them, they figure out a way to come back,” Zack said.

At WSU, Zack works with a collection of insects belonging to the College of Agricultural, Human and Natural Resource Sciences.

In the collection’s 100-year history, it has amassed about three million different specimens through collection, donation and individual research projects.

Zack brings his expertise to WSU to teach students who are die-hards for bugs and those who simply need to fulfill general biology requirements.

“There is so much that these animals offer us that allow us to study biology,” Zack said. “I am still amazed by the number of students who really don’t want to take the courses.”

Zack said he hopes to provide students with a fresh perspective on insects.

“I had a very positively infectious professor for my first class,” Zack said. “Insects fell into this area that isn’t bacteria or viruses where you have to explore them in a lab under a microscope, and they weren’t grizzly bears and big animals that required a specialization.”

Zack said he enjoys teaching others about insects because he believes many people are removed from the outside world.

“If insects were removed, we’d see a total difference,” he said. “People in general don’t realize how much insects do.”

Zack said people ought to look closely at insects rather than fear them.

“If you look at most insects up close, they’re fascinating to look at,” he said. “It’s a very beautiful world to be a part of.”