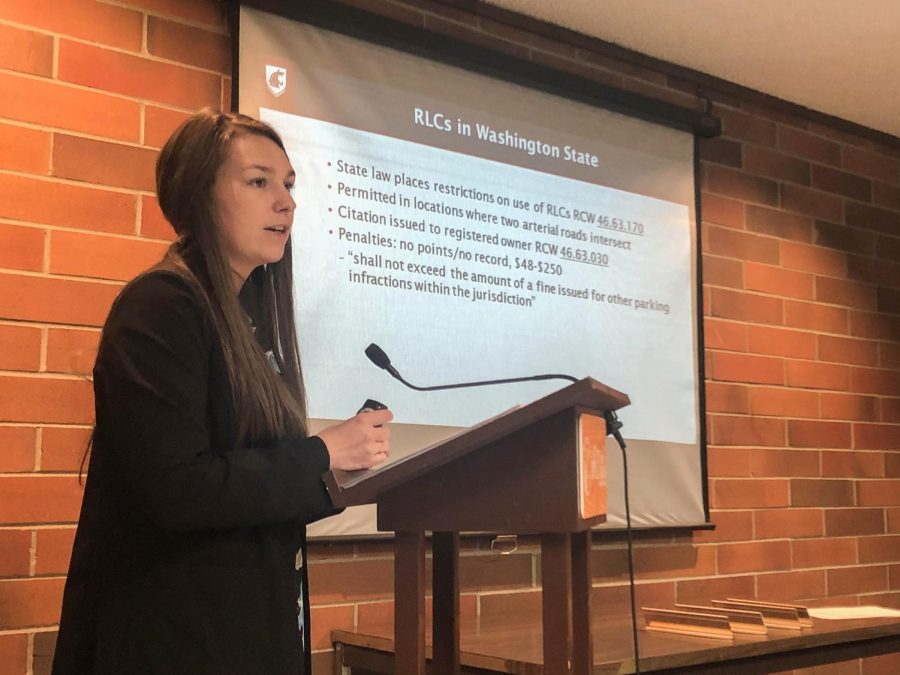 Red-light cameras are designed and implemented by cities to
reduce the amount of traffic violations and intersection collisions. However
studies over the past decade show there are more effective methods to achieving
this goal.

Megan Parks, WSU criminal justice and criminology doctoral
student, presented data on the effectiveness of red-light cameras to the
Pullman Police Advisory Committee during a meeting on Monday.

“Overall, the research on the effectiveness of red-light
cameras has been a source of controversy over the research community,” Parks
said.

Red-light cameras are cameras put on traffic lights which photograph traffic infractions at a red-light.

Parks is also a research fellow in the Public Safety
Fellowship (PSF). The PSF was established by WSU associate professor of
criminal justice David Makin.

The fellowship works with Pullman and Moscow law enforcement
to research and collect data to help improve public safety and policing.

“That’s literally [Parks’s] job and my job is to teach her how to do these things so it works out,” Makin said.

Parks cited several research studies, including ones from
2005, 2015, 2017 and 2019 which showed a decrease in the average number of
crashes at intersections. However, the studies found an increased number of
rear-end crashes.

“If you look at the raw numbers, they’re pretty small,” Parks
said. “That’s pretty consistent with the other research as well.”

Pullman Chief of Police Gary Jenkins said the police department has no data about red-light crashes, but could obtain it.

She said there has been an increasing number of communities
that are removing red-light cameras. Factors such as camera vendor revenue and
the burden of proof to identify drivers have contributed to the removal of
cameras, she said.

“When contractors receive a cut of the revenue, this is really
problematic because it gives incentive to contractors to rig the system to
increase the revenue,” Parks said. “It really undermines public safety because
in these cases, they’re doing things like shortening the times of yellow
lights.”

Alternative methods such as increasing yellow-light times,
implementing a brief period where all lights at an intersection are red and
increased traffic light visibility can be more effective than red-light
cameras, Parks said.

She said cities must consider whether the goal of using
red-light cameras is to reduce violations or reduce collisions.

“There is really a difference between taking a problem-solving
approach to issues versus taking a more punitive response,” she said.

Jenkins said Pullman is not considering implementing red-light
cameras in the city because there has not been a serious problem with red-light
collisions.

“We do get asked about that regularly so it’s good information
to have,” he said.

Makin said the fellowship focuses on data which will help
smaller law enforcement agencies like Pullman PD because research in large
cities is not applicable to small cities like Pullman or Moscow.

“We always almost focus on Seattle and NYPD,” he said.
“[We’re] trying to get people to see the real value of this type of data
because you can be much more nimble and responsive with a community this size.”

Most collisions that occur in Pullman are due to weather and
road conditions, Jenkins said.

The committee also decided to introduce new police officers during the next meeting on March 9.