Regional Theatre of the Palouse presents “She Loves Me”

This classic love story will run Feb. 13 through Feb. 23 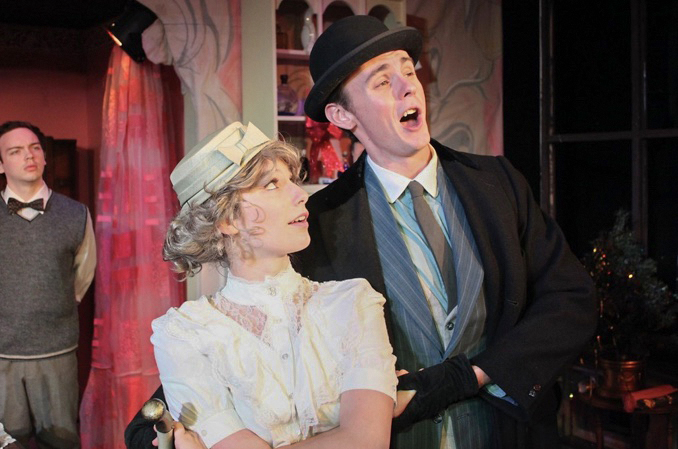 COURTESY OF REGIONAL THEATRE OF THE PALOUSE

The Regional Theater of the Palouse (RTOP) is performing the classic Broadway musical “She Loves Me” this Valentine’s season.

“She Loves Me” originally premiered in 1963 and takes place in a Budapest perfumery, following bickering coworkers Georg Nowack and Amalia Balash. Both find pen pals through their local newspaper’s “Lonely Hearts” section, and take solace in writing to them.

Georg and Amalia are constantly at odds until it’s revealed they are writing to each other, prompting a newfound optimism for unexpected love. The original script has inspired several spin-offs, such as the 1998 film “You’ve Got Mail” with Tom Hanks.

“I wanted this Valentine — this lacy, Victorian Valentine. I think it really fits the bill,” said John Rich, “She Loves Me” director and founder of RTOP.

Rich moved to Pullman in the late 2000s in an attempt to escape the theater business. Instead, he found himself running the nonprofit theater.

“I probably had a six-month hiatus from show business and then did a show,” Rich said. “Now, it’s both my profession and my passion.”

“He’s a playboy and a big flirt, and I’m a big flirt,” Smith said. Smith likes the play’s song and dance numbers, and the opportunity to play a little bit with the vaudeville-esque musical script.

Adkison, who has played leading roles in shows around the U.S. — “The Music Man,” “To Kill A Mockingbird” and “The Sound of Music” — plays the male lead, Georg.

“There’s this very put-together facade and underneath [Georg is] as nervous as they’d say ‘a cat in a room full of rocking chairs,’” Adkison said.

The arts and the community are meant to support each other, Rich said. Without the support of the community, the arts will rot.

“People don’t realize what a little gem we have here,” Rich said. “[Our theater is] bringing in national talent. We want our product of shows to keep getting better and better.”

The first show starts at 7:30 p.m. Thursday, Feb. 13. Eleven more shows will run through Sunday, Feb. 23. Tickets are $19.99 each, and groups of 10 or more receive a 10 percent discount on tickets. Additional performance dates, times and information are available on the RTOP website.