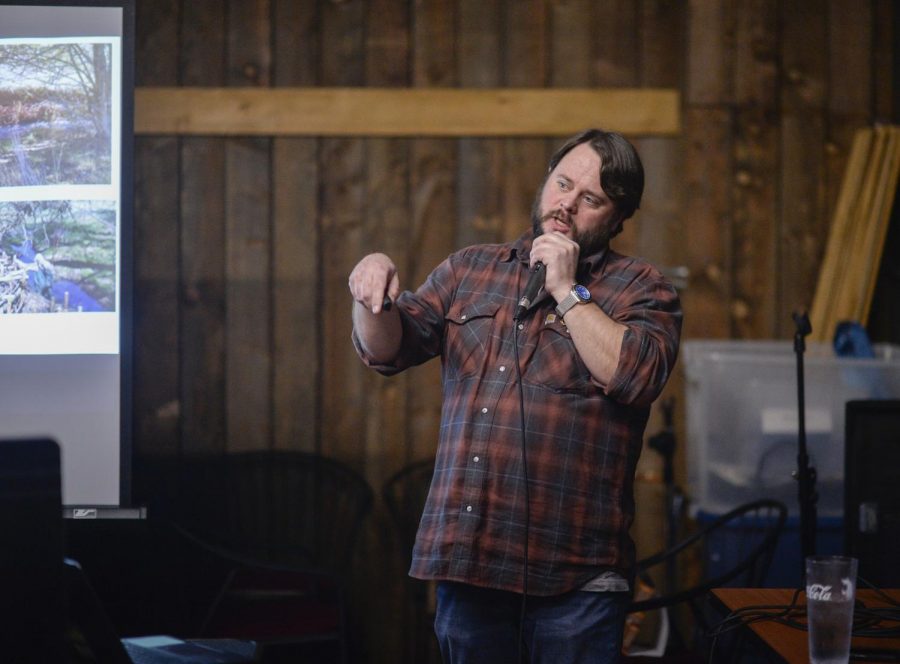 The Palouse Conservation District (PCD) held a presentation about stream structure on Wednesday in the Paradise Creek Brewery Trailside Taproom.

He said reshaping stream structure can restore riparian zones, which are areas near streams, to healthy conditions.

Stevens said using post-assisted log structures (PALS) can also change stream structure. This is a type of restoration technique where wood debris is planted in the stream.

PALS creates more water flow and increases the flow of sediment deposits, he said. These structures also create areas for species like salmon to lay eggs and raise their young.

He said more logs in the stream means there is more chance for the stream’s structure to become more complex.

“The more complexity a stream has, the healthier it is thought to be,” Stevens said.

Complex structures help build more resilience in the stream’s environment, he said. Streams become more functional as well, meaning more species will be able to live in the streams.

If a stream lacks structure, this means a stream has a smooth system and the water flows in a straight manner, he said. This can be problematic. For example, if a flood occurs, fish can be easily swept away.

Another method to alter stream structure is the use of beaver dam analogs (BDAs), which are human-made designs that imitate natural beaver dams, Stevens said. BDAs collect a lot of debris that travel downstream, expands riparian vegetation and can change ecosystems rapidly.

He said changing stream structures to a more complex system is important because it helps improve the overall function of a stream. This includes drought resistance and reducing the severity of fire.

This also helps keep the water in the stream, which is important for aquifer recharge for groundwater levels.

“Streams give the water a place to go, slow it down, and reduce that kind of thing from happening,” Stevens said.

Some of the issues streams face include lack of water storage, which increases the effects of droughts, Stevens said. Lack of vegetation in and around the streams, lack of habitat for wildlife, and increased water temperature negatively affect the overall health of the stream.

Alison Crowley, PCD education and outreach as well as a restoration technician and AmeriCorps intern, said the public should care about this issue because the local area is surrounded by agriculture. She said it is important for individuals to bridge the gap between environmental awareness and how people operate within the environment.

Crowley said the PCD holds conservation talk series every second Wednesday of each month where the PCD discusses conservation practices they support and implement. They also talk about conservation efforts PCD has conducted.

The next PCD conservation talk is on March 11 from 6-7 p.m. in the Paradise Creek Brewery Trailside Taproom. The PCD will talk about conservation and native plants.