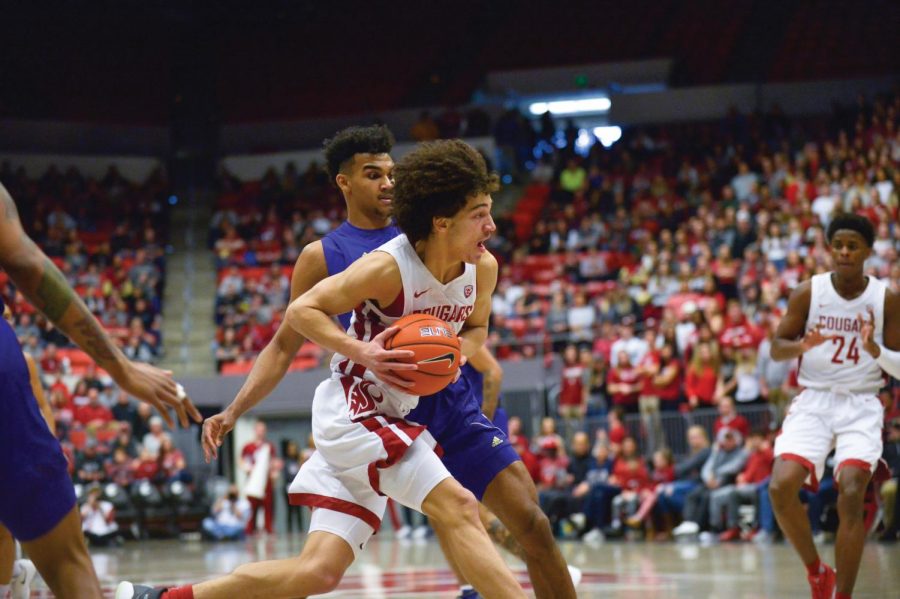 Sophomore Forward C.J Elleby sprints by defenders as he goes in for a layup on Feb. 9 at Beasley Coliseum.

WSU’s men’s basketball will finish its road trip against the
University of Southern California Trojans at 5 p.m. Saturday in the Galen
Center in Los Angeles.

WSU lost its first matchup against USC (18-7) 65-56 in Beasley Coliseum back in the first game of the Pac-12 regular season on Jan. 2. Despite the single-digit deficit, WSU was out of sorts across the board shooting 27.8 percent from the field on 79 shot attempts.

The only game WSU had more field goal attempts was in its
first game of the season against Seattle University with 81 attempts. WSU
scored 85 points in its win against the Redhawks.

Sophomore forward CJ Elleby scored nine points and shot
three of 22 from the field. This performance is his third-lowest point total in
a game this season and his career high for most shot attempts in a single game.

USC freshman forward Onyeka Okongwu, the Trojans’ leading scorer this season, had a field day against the WSU’s bigs in the last game at Beasley. He scored 27 points and grabbed 12 rebounds; his 27 points remains the most by an individual against WSU this season.

USC defeated the University of Washington Huskies 62-56 Thursday night in the Galen Center. USC freshman forward Onyeka Okongwu did not play as he went through concussion protocol according to Ryan Kartje, USC basketball beat writer for the Los Angeles Times. Okongwu’s injury is classified as day-to-day and remains active in Saturday’s matchup against WSU.

WSU and the UCLA Bruins went into overtime on Thursday with Bonton leading the Cougars in scoring in regulation play with 21 points. Senior forward Jeff Pollard achieved a career high in points and 3-pointers made.

WSU is 16-45 historically against USC on the road and has not won on the road since 2015. Since then, the Cougars have a seven-game losing streak to the Trojans.

WSU will tip off against USC at 5 p.m. Saturday in the Galen
Center in Los Angeles. The game will air on the Pac-12 Networks.