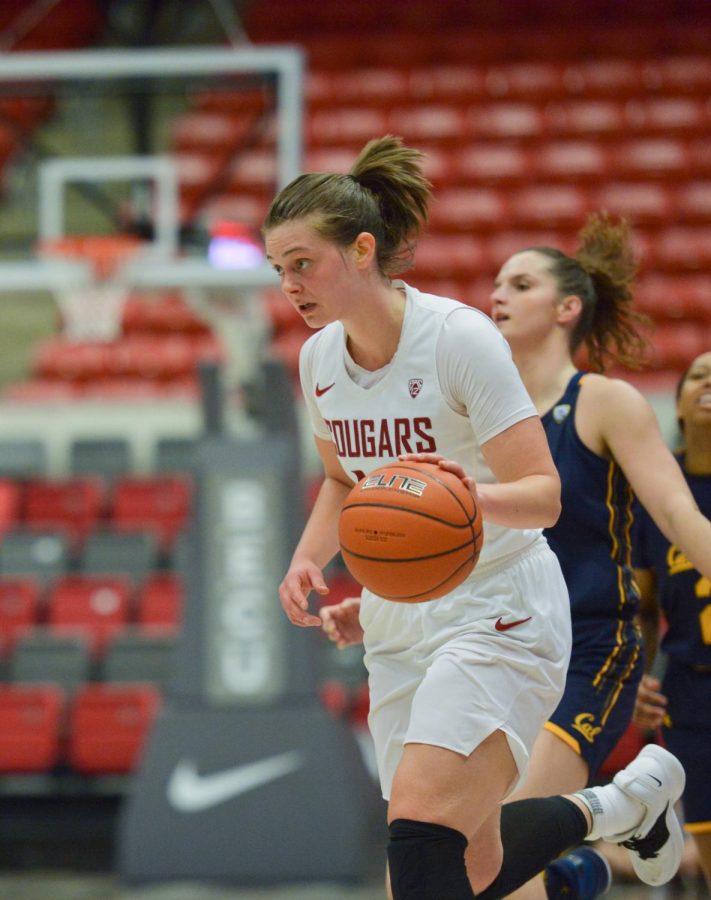 Senior Forward Borislava Hristova gets by a Cal defender as she looks to score on Jan. 31, at Beasley Coliseum.

The WSU women’s basketball team is on this road this weekend in Arizona.

The first stop is in Tempe, Arizona to face No. 22 Arizona State University Sun Devils at 6 p.m. Friday. The team will then travel to Tucson to play the No. 12 University of Arizona Wildcats at 11 a.m. on Sunday.

The theme last weekend was slow starts and great finishes. The Cougars lost the two first halves by an average of 17 points but managed to excel in the second, outscoring their opponents by an average margin of 16 points.

“We need to focus on
our warmup,” junior forward Jovana Subasic said. “We need to be better prepared
to get into the game than we’ve been recently.”

Junior guard Johanna Muzet scored 12 points against Utah off the bench. Halftime adjustments are a reason they have been playing better in the second half, she said.

“The halftime speech
that comes from coach Ethridge has helped to motivate us,” Muzet said. “It
helps me play more aggressive and allows me to change the way I’m playing for
the rest of the game.”

Both the Arizona
schools are ranked opponents and the Cougars have yet to get a win against a
team of this quality.

“I think we need to
figure out our stuff and bring energy,” Subasic said. “We need to worry about
the things we can control because we failed to do that in our last game.”

The Sun Devils are on a three-game losing streak, which they lost by nine points to UCLA, two points to Oregon State University and a 31-point loss to the No. 3 University of Oregon.

The Arizona Wildcats
have won six of their last seven games and are ranked 12th in the nation.
Arizona is led by junior guard Aari McDonald who averages 20.5 points per game.
She is the leading scorer in the Pac-12 and is 10th in scoring in the nation.

McDonald is capable of winning a game by herself as she has scored at least 20 points in 12 of the games including a 44-point outburst against University of Texas.

The Cougars play the Sun Devils at 6 p.m. on Friday in the Desert Financial Arena in Tempe, Arizona. They play against the Wildcats at 11 a.m. Sunday in the McKale Memorial Center in Tucson, Arizona. Both games will be broadcast on the Pac-12 Networks.