SATIRE: Moscow is a town of sleeper KGB agents

Moscow, Idaho has more in common with it's Russian cousin than we think, it has the KGB 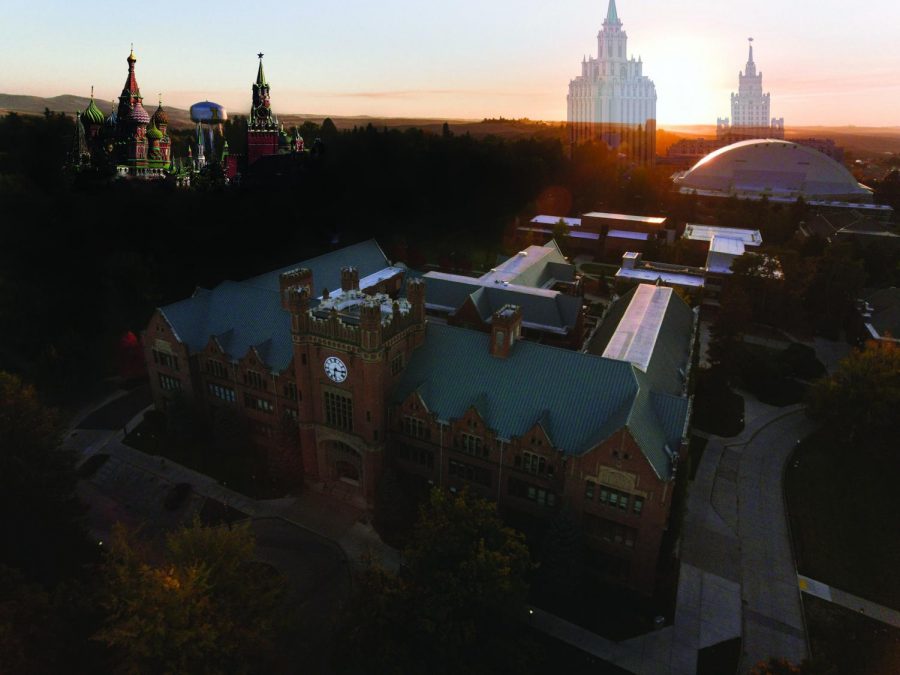 Don't let this sleepy town in the Palouse fool you. If we hadn't won the Cold War, Moscow would still be the center for the KGB's strongest sleeper cell

Since
the collapse of the Berlin Wall, it seems that the United States won the war
against communism. The once-powerful empire of the USSR was toppled by a cowboy
actor from the 1950s and the pervasive influence of McDonalds. A moment of
silence for the passing of Mother Russia was had, and then “Fight Club” came
out, and we all kinda forgot about Soviet Russia. (Unless you lived in the
Balkans or Afghanistan or Grenada or Vietnam or-)

But
it seems that our victory over the filthy Communists was less assured than it
seemed at the time. To understand why, we must look over our very own
Washington/Idaho border, home to the best Mexican food I’ve had in a while, and
the University of Idaho Vandals. The answer seems too obvious and on the nose
to even be true, but regardless, the facts remain: Moscow, Idaho, was the
secret base for deep-cover KGB operatives during the Cold War.

“It’s true,” says Vladimir Dostoyevsky, the owner of Putin’s Pastries, a Moscow bakery. Dostoyevsky developed the world-famous Red Scare, a donut with an “explosive” strawberry jelly surprise inside its flaky core. In addition to his experience as a pastry chef, Dostoyevsky was a deep-cover Russian operative, tasked with determining how Arnold Schwarzenegger didn’t die of a steroid-related coronary while filming “Predator.”

“My mission was to find out how he kept his pecs, as you Americans call them, in such pristine condition,” Dostoyevsky said. “You could bounce a quarter into orbit off those bad boys. If we could have figured that out, Russia’s super-soldier program would have been unstoppable. Typical Americans, you have the secret to physical perfection sitting in front of you, and you cast him in ‘Jingle All the Way.’”

Established
in 1957 by Soviet operatives disguised as wheat farmers, Moscow has been
essentially a cover for all sorts of nefarious USSR projects since its
inception.

“Nuclear
secrets, biological warfare, Madonna, we had a hand in it all,” said former KGB
lieutenant Ivan Solzhenitsyn. “We were so devoted to the illusion, that we
actually improved the property value of the Palouse area, just to preserve our
impression as hard-working Americans.”

Solzhenitsyn’s
cover was an organic beet farmer, selling at farmer’s markets and to local
restaurants.

“I
chose beet because it is red, like Soviet colors. It is glorious, yet
unassuming, like Russia,” Solzhenitsyn said. “I do not know of this Dwight
Schrute so many people compare me to. I do my job for my country, and I grow
delicious beets. I have nothing more to say.”

The
diligence of the undercover KGB agents to destroy American society and
establish godless communism ironically ended up increasing Moscow’s reputation
as one of Idaho’s more reputable small towns.

In
addition to his skill for extracting state secrets (and also teeth),
Barretsovich found he had a particular knack for the bass and started a local
band.

When the Soviet Union fell to American imperialism freedom tactics, most of the KGB members left here were nation-less and jobless.

“Mother
Russia had fallen,” Dostoyevsky said. “What was I supposed to do? I tell you,
the job market for a Russian spook is not great, especially since the CIA is
strictly a Nazi-hiring organization only.”

Many
of Moscow’s residents decided that, rather than try to rejoin their crumbling
country and work as Mikhail Gorbachev’s birthmark polisher, they’d maintain the
life they’d been leading, in the hopes that their country would need them again
in the future.

“I
keep playing the bass and brewing Darryn’s Drinkies, my craft beer, and I keep
waiting to get that secret letter-drop telling me I’m back in action,”
Barretsovich said, plucking out a Tool riff on his Gibson. “Until then, I riff
for Mother Russia.”

With
little hope on the horizon for their former undercover jobs, most of Russia’s
finest have resigned themselves to a life in small-town America.

When you’re in Moscow next, make the trip to Putin’s Pastries, and ask Dostoyevsky to show you the back room, where he used to beat American CIA operatives into revealing missile codes. If you have a chance, make sure to order the “Cyanide Surprise,” a donut combo that he perfected. It’s to die for.

Jacob Hersh is a political science major from Anchorage, Alaska. He can be contacted at 335-1140 or at [email protected] The views expressed in this column do not necessarily represent the views of The Daily Evergreen, its editors or publishers.