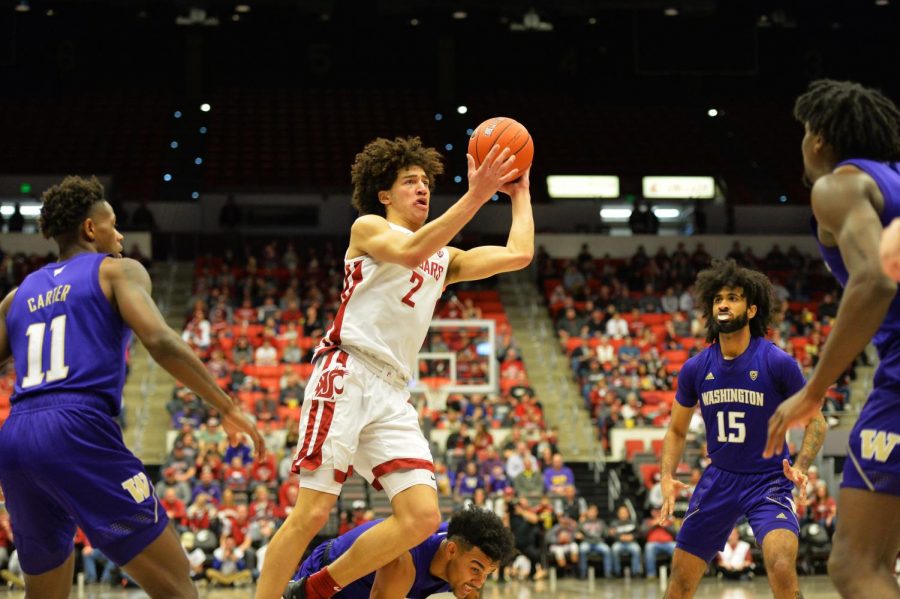 Sophomore guard CJ Elleby throws up a shot after being fouled during the Apple Cup matchup Feb. 9 at Beasley Coliseum.

This last matchup was the first loss of an ongoing streak in conference road play this season for WSU. Cal comes into Pullman with a similar statistic as the Golden Bears accumulated all their wins this year at home and none on the road.

Senior forward Jeff Pollard said he looks at this matchup
against Cal as a combination of getting a revenge win and re-establishing the
team’s roots.

“The Bay Area trip was not a successful trip for us,” Pollard said. “It’s an opportunity to hit them back and make up for [the loss].”

Cal sophomore guard Matt Bradley achieved his season high in
points against WSU in January with 26. Bradley ranks fifth in the Pac-12 in
points per game with 17.8 compared to sophomore forward CJ Elleby ranking third
with 18.7 points per game.

“He’s really kind of a battering ram; he’s like a smaller CJ
[Elleby],” head coach Kyle Smith said. “We’ll have to throw a lot of different
guys at him.”

In addition to his previous performance against WSU, Bradley brought in 10 rebounds. This is the second time this season that a player shorter than 6 feet 5 inches grabbed double-digit rebounds against WSU.

The WSU coaches consistently remind the team about
rebounding at the guard position, Pollard said.

Junior guard Isaac Bonton injured his hip in the overtime period against UCLA on Thursday. Smith said Bonton’s recovery is progressing well but remains doubtful for participation against Cal.

In WSU’s recent loss to USC, the Cougars scored eight points
off the bench. Smith said the team may experiment with junior forward Marvin
Cannon’s inclusion in the rotation and possibly start him given Bonton’s
injury.

“We’re either going to bring him off [the bench] or start
him, just to get him going.” Smith said. “We need him without Isaac.”

Freshman guard Ryan Rapp said the team will somewhat suffer without Bonton against Cal, but everyone on the team is ready to play their role to succeed without him.

“We’re going to have to step up in the right way,” Rapp said. “We don’t have to necessarily score; we just got to make sure we get our team set and our offense. Whoever scores, scores.”