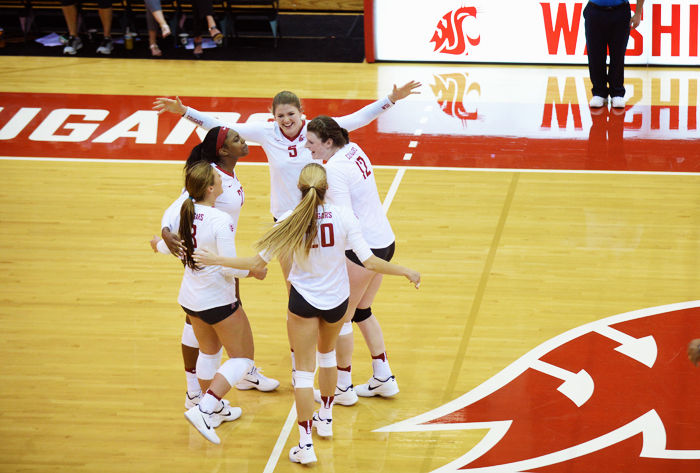 WSU women’s volleyball offensive attack has been key in their success this season.

Riding a seven-match winning streak, the WSU women’s volleyball team is making a trip to Waco, Texas for the Baylor Classic this weekend.

The Cougars (8-1) will play College of Charleston, University of Virginia and Baylor University.

WSU comes into the tournament not losing since Aug. 26 and has not dropped a set since Sept. 3 against the University of California, Irvine.

“There’s a whole group of people that are weapons,” junior setter Nicole Rigoni said of the team’s success this year.

WSU currently has four different players with 50 or more kills on the season including senior outside hitter Hailey Bethune, who is ranked fourth in the nation in hitting percentage at .469.

The Cougars have used their diverse offensive attack to reach eight wins just three weeks into the season, including a season-opening victory over a University of Kentucky team that was ranked No. 24 in the country at the time.

WSU is hitting over .300 as a team and has held opposing teams to just .116. Those numbers put them at seventh and fifth in the country respectively.

The Cougars are also seventh in the country in team blocks per set behind very strong play from sophomore middle blockers Claire Martin and Taylor Mims. WSU gained some national recognition because of its hot start, with the team receiving 16 votes in the American Volleyball Coaches Association (AVCA) top-25 poll this week.

In order to continue climbing in the national polls and to stay in rhythm for conference play, WSU will have to take care of business in Waco.

“Yes, we are excited to be starting conference next weekend, but we need to take care of this weekend first,” Bethune said.

This weekend starts at 2 p.m. today with a match against the College of Charleston (C of C) team that won 14 consecutive Colonial Athletic Association (CAA) conference championships in a row prior to 2015 and carries a 6-3 record on this season.

Charleston is ranked in the top-50 nationally in both opponent hitting percentage and assists per set but is hitting just .186 as a team. Despite its offensive struggles, C of C has strong passing and defense and is not to be taken lightly.

Freshman outside hitter Lauren Freed leads C of C in kills per set with a mark of 3.36, and received CAA Rookie of the Week honors for her performances on the ninth and 10th of September. In a tournament hosted by College of Charleston, Freed hit .302 for the weekend, but excelled on both sides of the ball, posting double-doubles in all three matches.

WSU will play at 11 a.m. tomorrow against University of Virginia (3-6). The Cavaliers struggled in their last tournament, dropping a five-set match to St. Louis University and failing to take a set from the University of Kentucky or Marquette University, coming away winless on the weekend.

The Cougars close out the tournament against the host, Baylor University at 5:05 p.m. tomorrow. The Bears play Wednesday in Baton Rouge, Louisiana against Louisiana State University (LSU) and will have a quicker turnaround than any other team at the tournament.

The Bears most notable matches have both been losses. The team’s only home loss against the University of Texas, Rio Grande Valley (UTRGV) and a close defeat against the 13th-ranked Seminoles.

Baylor plays strong defense, holding opponents to a hitting percentage of .179 and an average blocks per set mark of 2.3, which puts the Bears at No. 30 in the nation in that category.

The Bears strong defense will be a good final test before WSU enters conference play in one of the toughest leagues in the country.

The Baylor Classic can be followed live on wsucougars.com with a live streaming radio call.