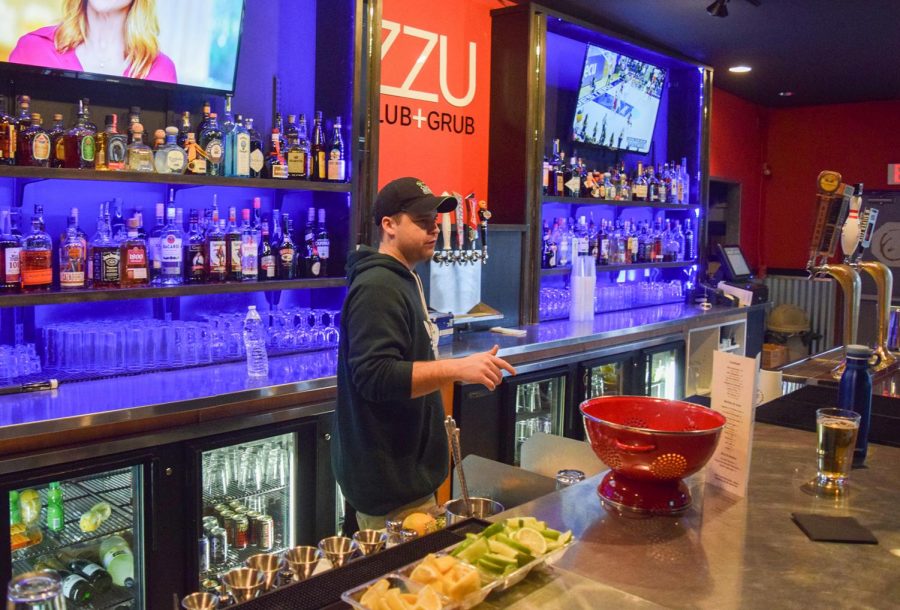 Former ZZU Manager Skyler Cracraft tends to the bar at the ZZU Club and Grub bar in February 2018.

The ZZU Club and Grub has closed and reopened several times in the past few years, but this time it will reopen with a new name and look.

The Land will open its doors to the public on Feb. 24. There will not be a grand opening ceremony.

Lance Lijewski, The Land marketing manager, said the new owners purchased the building in September and reopened the ZZU in October. Construction for The Land started in December.

The remodel will include adding five more windows and new paint, he said. The space will have more table seating and a smaller dance floor.

“When you used to walk into the building it was really dark, there wasn’t a lot of natural light,” Lijewski said.

The bar will also have a 21+ lounge, study space and a DJ booth.

There will still be a game room with three billiards tables and two dartboards. He said there will be leagues for people to compete in.

The ZZU on 1525 NE Merman Drive, was purchased last September by the owners of The Coug, as well as other buyers, Lijewski said.

The building was listed for sale last June for $1.2 million, according to a report from the Moscow-Pullman Daily News.

The Land management wants the bar to feel like a welcoming space during the day and have a fun, lively atmosphere at night, Lijewski said.

The Land will be open seven days a week from 11-2 a.m. Minors can purchase food until 9 p.m. every day of the week.

He said the tradition of event nights will continue after its opening with events, such as country nights and Latin nights.

Some of The ZZU’s popular items will continue to be served at The Land including burgers, sandwiches and macaroni and cheese. The Land will have a full bar with cocktails, beer and cider, Lijewski said.

He said the owners wanted to use The Land as the bar’s new name because the building is in the middle of what is known as “apartment land.” The bar is located by 2,500 multi-family units, according to the Moscow-Pullman Daily News.

“They want it to be a safe, trendy space for the community,” Lijewski said.

Editor’s note: This article was amended to correct a statement by Lance Lijewski