After 30 years as a WSU academic adviser, Valorie Fisher will retire after second semester 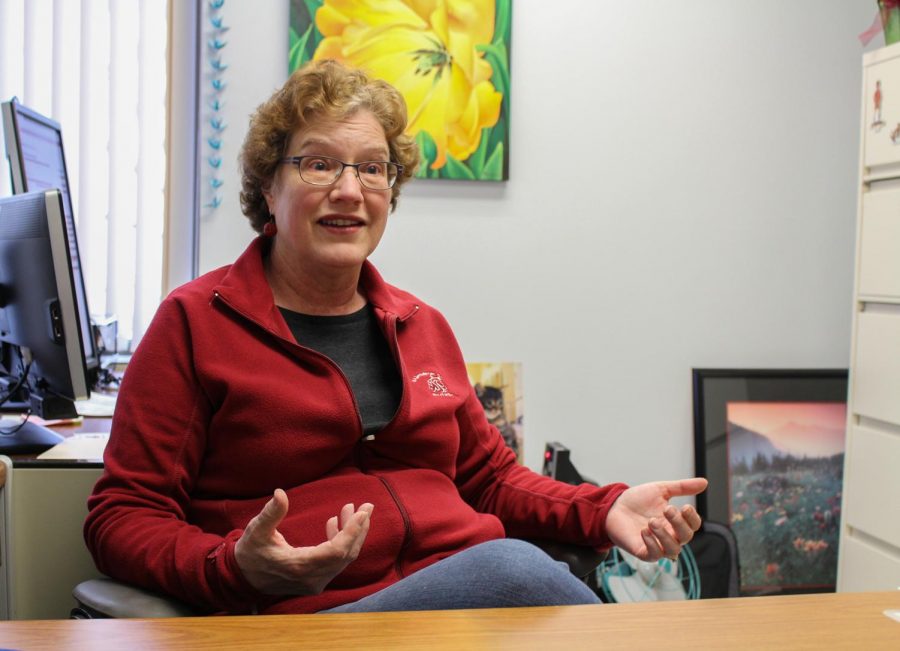 Animal Sciences Academic Coordinator Valorie Fisher explains one of the most rewarding moments of her job on Tuesday afternoon at Clark Hall. She says her biggest accomplishment is helping students earn a degree.

Art collections, squirrel figurines and cat photos adorn Valorie Fisher’s office in Clark Hall. A timeworn wedding photo and a bowl of candies fill the room with an atmosphere of warmth and energy.

For more than 30 years, Fisher has worked as an adviser in WSU. She is retiring after the end of the semester.

In her role as an academic adviser, Fisher incorporated a philosophy of care and respect for her students. She said she wants her students to know she is there to help them get the education they want. Fisher said she does this by being attentive to details and by listening to students about what they are looking for in their educational journey.

“First you have to listen to the student because you’re here for them,” she said. “Then the detail part comes in in just making sure that they’re hitting what they need to hit at the right times.”

Her daughter’s college experience influenced the way she handles her position as an adviser, Fisher said. She asked herself how she wanted an adviser to treat her daughter.

“When I come to work, I just think about doing the best for the student that I see — not just the first one I see in the morning, but the last one as well,” she said.

Her biggest accomplishment is helping students earn a degree, especially students who thought they would not be able to accomplish that, Fisher said.

A memory that stands out to her is when she ran into one of her past students at a grocery store. The student was with his family. His wife met Fisher and thanked her for helping their family.

“It still makes me cry to this day because it was really important to their family that he get a degree,” Fisher said.

Since 2012, Fisher has been the Animal Sciences academic coordinator. She was the department’s first professional adviser. Fisher said faculty acted as advisers for students before she took the position.

Her advising journey began when she was a WSU undergraduate student studying speech communication. Fisher said she was part of the first group of trained WSU peer advisers. She worked with students who had not declared a major.

Fisher transitioned from being a peer adviser to working for a group called Science Supportive Services where she worked with undeserved STEM students. Afterward, she worked as a WSU electrical engineering adviser for a few years. She then moved into the general studies program where she advised students in the humanities, social and general sciences.

She decided to become an adviser for the Animal Sciences department because of the faculty’s energy, Fisher said. She worked with some of the department’s faculty during an Alive orientation and enjoyed her time with them.

Martin Maquivar, Animal Sciences clinical assistant professor, said Fisher has been a resource of information and experience for the department.

Fisher introduced him to the traditions of Cougar football, Maquivar said. One of the best memories he has of Fisher is talking to her before football games.

“Working for her has been an honor and a pleasure because she has been teaching me a lot,” he said. “She is really kind. She truly cares about what she does.”

Outside of work, Fisher is an art collector and she likes to engage in downhill skiing. She loves gardening and belongs to two book clubs.

Fisher said she plans to visit different art shows after she retires. She also plans to travel around the Pacific Northwest. She and her daughter plan to visit Scotland and France.

“I’m really proud of all the students that I’ve worked with that have gone on and done great things, and that I’ve been a part of that,” Fisher said. “That makes me happy.”