Teams together represent many countries, have two total Americans 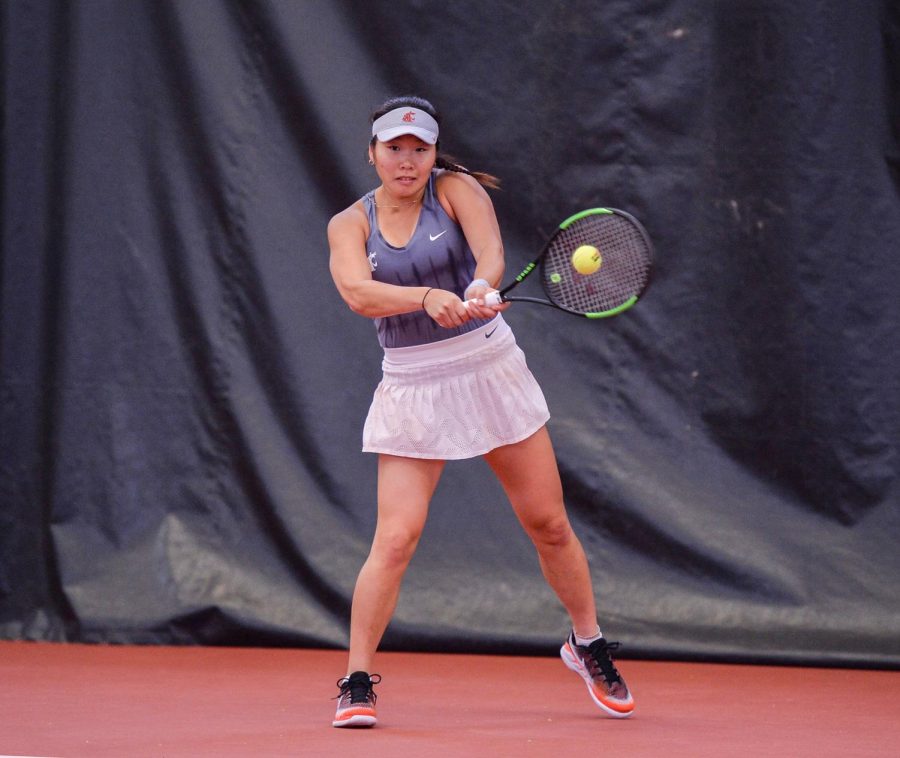 Sophomore Hikaru Sato connects with the ball against Gonzaga on Feb. 8 at Hollingbery Fieldhouse. The Cougars won the match 4-1.

The WSU tennis team will finish its four-match homestand against the Fresno State University Bulldogs at noon Thursday in the Hollingbery Fieldhouse.

The Cougars come into the match ranked 34th in the nation by the Intercollegiate Tennis Association.

The Cougars (6-1) will look to get their fourth win in a row. The opposing Bulldogs (6-3) will come to Pullman with a five-match win streak and have won their last three matches 4-0.

Junior Michaela Bayerlova and senior
captain Melisa Ates are ranked 63rd and tied for 107th in the nation,
respectively, according to the ITA’s website.

“We just need to stay focused on
every match,” Bayerlova said. “Especially coming up when we start playing
better teams.”

Fresno State’s sophomore Shir Azran, sophomore Deniza Marcinkevica and senior Georgia Lawson have led the Bulldogs as the top three players on the team, according to Fresno State’s athletics website.

Azran was born in Bat-Yam, Israel, and was ranked as high as first in the country for high school players. She also served in the Israel Defense Force as a colonel’s clerk for two years before coming to Fresno State, according to Fresno State’s athletic page.

Much like WSU, the Fresno State
women’s tennis team is very diverse. Both teams have one player on their roster
from the U.S., and WSU has eight international players and Fresno State has
seven.

The two American players that will play in Thursday’s match are WSU freshman Maddie Egan and Fresno State sophomore Jane Ellis. Egan is from Puyallup, Washington and Ellis is from Fresno, California.

Some of the countries that the two teams represent on their rosters include Australia, Belgium, England, Germany, Italy, Japan and Turkey, according to WSU’s and Fresno State’s athletic website.

The match against starts at noon Thursday in the Hollingbery Fieldhouse and can be viewed on the live webcast.

After Thursday’s match, the Cougars
will head to New York City to take on Columbia University on Sunday and Fordham
University on Monday.