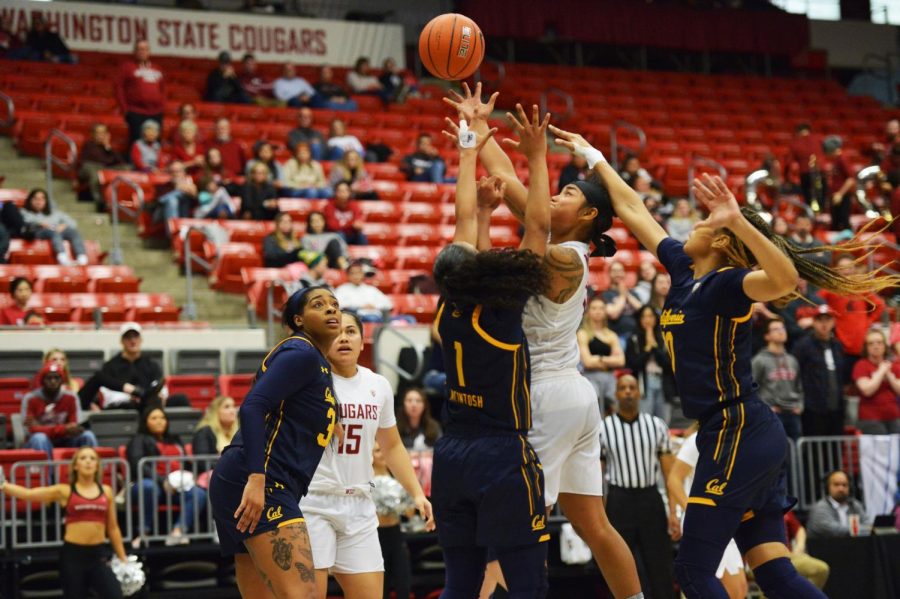 Senior Guard Chanelle Molina rises over multiple Cal defenders for a lay up on Jan. 31, at Beasley Colesium.

The
Washington State women’s basketball team hosts the No. 8 UCLA Bruins and the
USC Trojans this weekend in their last games Beasley Coliseum this season.

The
Cougars managed to shoot 47.8 percent from beyond the arc in that game, but the
discrepancy on the glass was too much for WSU to walk away victorious. The
Trojans had 44 rebounds while the Cougars collected 30.

Against
the Bruins (22-3, 11-3) the Cougars lost 66-50 on Jan. 26. Junior forward
Michaela Onyenwere had a field day for the Bruins as she scored 23 points and
grabbed six rebounds.

Two things went wrong for WSU in the previous matchup against UCLA: They could not take care of the ball and they could not defend without fouling. UCLA had eight turnovers; WSU had 19. UCLA shot 20 free-throws, and WSU shot six.

The Cougars have a tough task with these two teams, and redshirt junior forward Jovana Subasic said the Cougars need to play hard against the Bruins and Trojans.

“We need to match the intensity they bring to the table because if we do not, we will not compete,” Subasic said. “We must play up to their level.”

WSU is in the midst of a three-game losing streak. Subasic said the team stays supportive no matter what happens.

“We always look to criticize in a positive way to make sure we are moving in the right direction,” Subasic said.

The Cougars remain in search of their biggest win of the season as they still stand winless versus ranked opponents. They moved to 0-11 against teams of this standard last weekend but have another opportunity Friday night.

Senior forward
Borislava Hristova remains the focal point of the offense as she is averaging
18.7 points per game and has the ability to score far more than that.

The end of her historic career is on the horizon and this team has not beat UCLA since her freshman year, and she did not have the opportunity to participate in the game.

The Cougars host the Bruins at 7 p.m. Friday and host the Trojans at 11 a.m. Sunday. Both games will be in Beasley Coliseum and can be viewed on the Pac-12 Networks.