Team has yet to lose at home, notches fourth straight victory 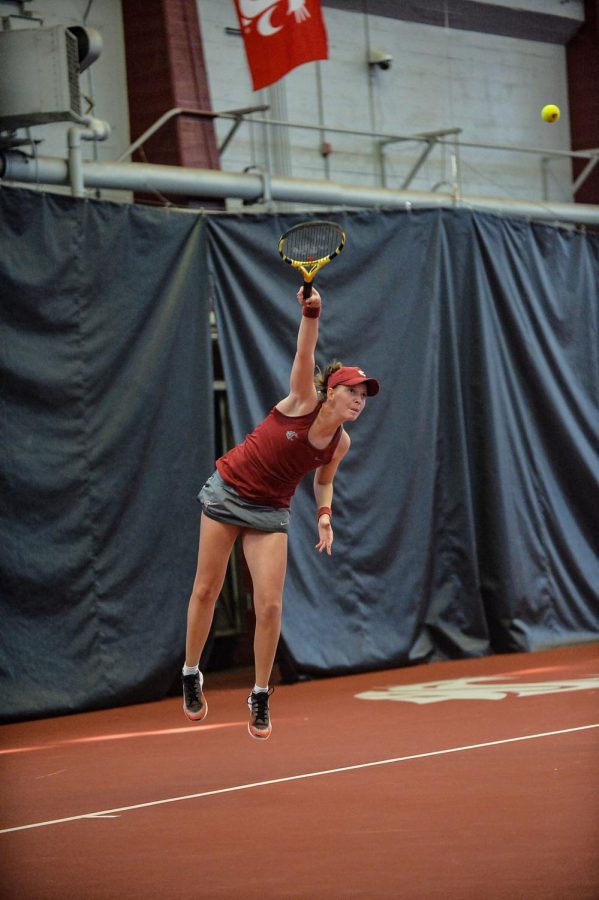 Junior Michaela Bayerlova serves the ball during the match against Fresno State on Thursday at Hollingbery Fieldhouse.

The WSU tennis team defeated the Fresno State Bulldogs by a score of 5-0 to guide them to their fourth straight victory on Thursday at Hollingbery Fieldhouse.

The Cougars (7-1) have yet to lose at home this season, with their only loss coming on the road against Stanford, the top ranked team in the nation at the time.

WSU broke Fresno State’s five-match win streak and scored the first point on them since they played University of San Francisco five matches ago. This was Fresno State’s fourth loss of the season and their first on the road.

WSU was led by senior captain Melisa Ates, junior Michaela Bayerlova and sophomore Hikaru Sato. All three players won both their doubles and singles matches, as they contributed to four of WSU’s five points.

“We came out with a lot of energy and wanted it so much, so everybody showed up today,” Ates said.

The Cougars swept the Bulldogs in the doubles competition to give them an early 1-0 lead. Bayerlova and Sato won their match 6-2 and Ates and sophomore Yang Lee won 6-4.

WSU put on another one-sided
performance in the singles competition, as they won four matches to clinch the
victory. Singles competition winners were Sato, Bayerlova, Ates and sophomore Savanna
Ly-Nguyen.

With Ates’ singles win against Fresno
State senior Georgia Lawson, she is now tied for eighth on WSU’s all-time
singles won list. Bayerlova, 63rd, and Ates, T-107th, were both nationally
ranked coming into the contest.

“It’s so early in the season so it doesn’t really matter that much,” Ates said, “But it’s always nice to be ranked.”

Head coach Lisa Hart earned her 228th career victory with her team’s win Thursday. She said she was proud of her team and that they are starting to play better tennis.

“Super excited for Melisa, big day for her and our program,” Hart said. “She’s been such a great captain and leader, and I couldn’t be more happy for her.”