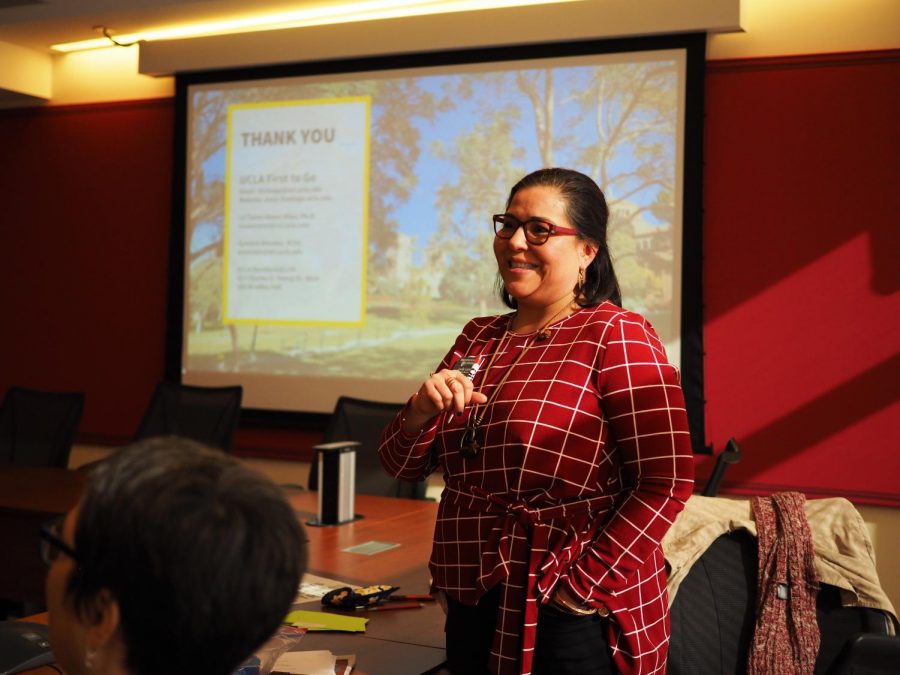 Lucila Loera-Herrera, Executive Director of the Office for Access & Opportunity, speaks about strategies for supporting first generation students on Thursday afternoon at the CUB.

A program under WSU’s Division of Student Affairs
hosted a webinar on ways to support first-generation students which includes
defining first-generation, targeting the population and identifying their
needs.

Symone Morales, UCLA coordinator of first year
experience, said the term first-generation student is not a stable definition.
This is because students can have parents with a four-year degree they got from
a school outside the U.S.

Morales said the standard definition of a
first-generation student is a student whose parents or legal guardians have not
completed a four-year degree.

The first thing Rease Miles and Morales look for
in an institution is how the institution compares to UCLA in size and
population of first-generation students.

Morales said
WSU should look at other institutions with similar populations of first-generation
students to see what programs are successful in helping the students.

“When you walk around campus or when you walk
into the grocery store you will [not] automatically be able to see that someone
is also the first in their family to go to college,” she said.

“I think the most important part is naming the
identity for the student,” she said. “Celebrating it and building a culture of
pride around it.”

Morales said their program has been successful
because they listened to the students. She said it is important to listen to
students because they know what they need or what can be improved.

Lucila Loera,
executive director for WSU’s Office of Access and Opportunity, said it is
important to serve students so they can be successful. This would be done by
having conversations, collaboration and focusing on different student
populations.

Raymond
Herrera, assistant dean of the graduate school, said the webinar is timely and
needed because student body populations are changing across the country.

Herrera said
the webinars are important because it makes colleagues get together and share
practices to help support first-generation students.

“[It creates]
a sense of community amongst those who
are working with the student populations,” he said.

Herrera hopes
that the webinar leads to WSU improving the experiences of
first-generation students.