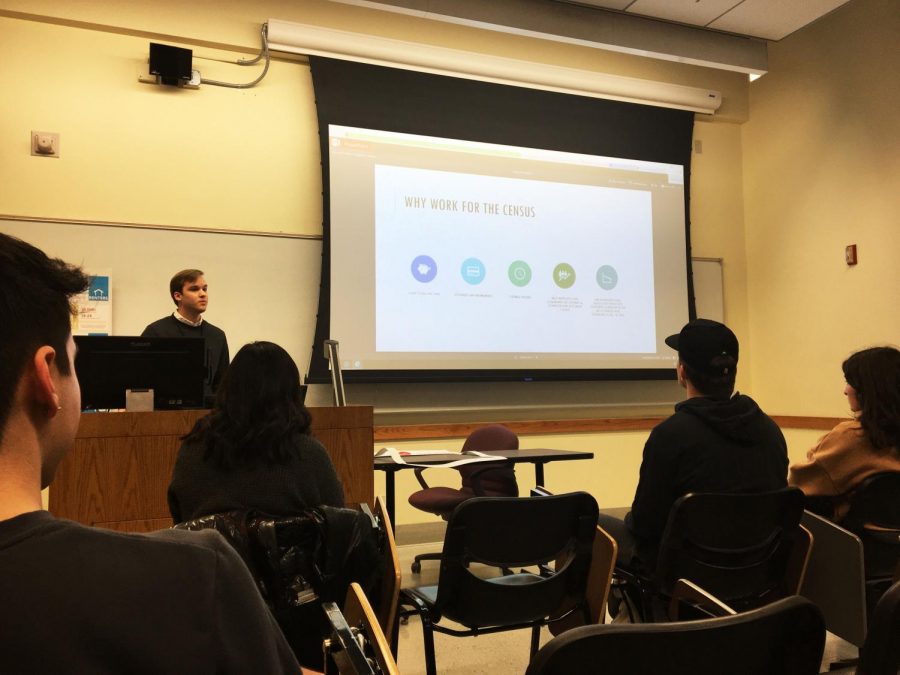 Gavin Green, Census Bureau recruiting assistant, gives a presentation on the 2020 Census and explains what the job entails on Wednesday at Todd Hall, Room 302.

A student club is working with the Census Bureau for a national competition to raise awareness about the 2020 Census.

Kendall Hoy, Cougs for Census team and research leader, said the census is the government’s way of keeping track of the population. She said Cougs for Census is competing nationally on behalf of WSU in the Public Relations Student Society of America (PRSSA) 2020 Bateman competition.

“We thought this would be a really awesome opportunity to connect the WSU campus with something that the census is putting on,” she said.

Shane Petrus, Cougs for Census art and design director, said the competition provides teams all across the nation with real world experience. This includes what it is like to develop a public relations campaign. He said the competition involves creating a campaign to promote a client or provide awareness.

Petrus said there are multiple phases in the competition. He said the research phase began in November and finished at the end of January.

Petrus said they are currently campaigning. This began Feb. 10 and will continue until March 20. After March 20, Cougs for Census will have until April to create and submit a campaign report as part of the competition.

He said the campaign is an opportunity to get the community involved with the Census.

Hoy said the goal is to educate the Pullman community and WSU students about the 2020 census so they can get involved.

Green said the main purpose of the count is to ensure fair representation, but it is used for many different purposes. The data is used to help government leaders make decisions and plans for their communities.

Hoy said the census also determines how $675 billion will be distributed among the states.

Green said census money is used for public services like fixing roads as well as funding schools and hospitals. The money also funds healthcare and emergency response services such as the fire department.

“Those things are really important for local communities,” he said. “If we don’t get the proper counts then those services don’t get the money that they need to serve their community.”

“All the funding we get is based off the way we report in the census,” she said.

McKenzie Ruppert, a junior majoring in public relations, said she attended the event to get more information about the census.

Ruppert said she hopes that the census job will help the community. She said she has heard the census is important, but that many people do not take it seriously.

Petrus said a lot can change in the community in 10 years which is why the census is important.

“The census is really important because it really makes a big impact on federal funding for resources for our community,“ he said.