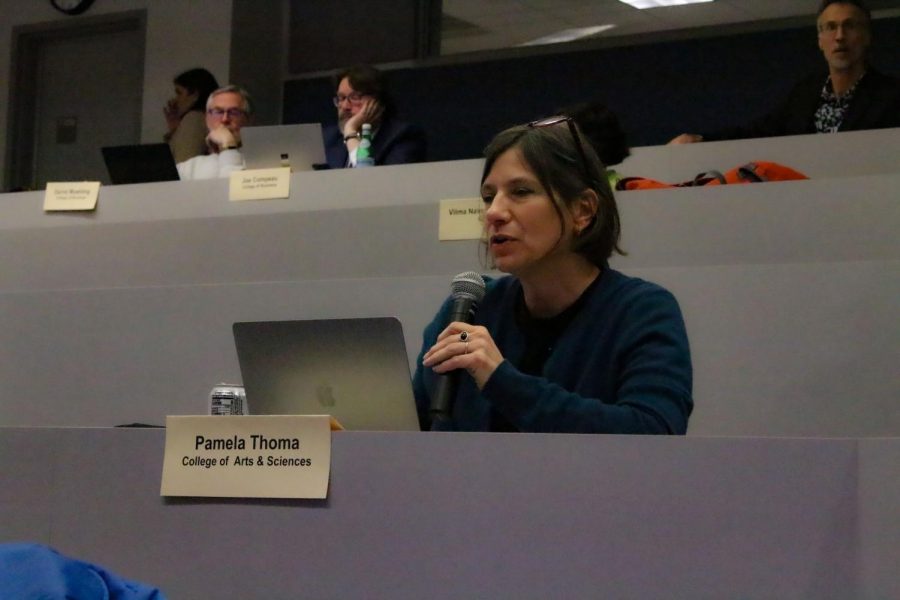 Representing the College of Arts and Sciences, Pamela Thoma asks a question to Greg Crouch, the Chair Faculty Senate, on Thursday afternoon at FSHN, Room T101.

This story was updated to correct an error. An outside firm will be conducting a review of the allegations of gender bias, not the Attorney General’s office.

An outside firm will be conducting an external review regarding WSU’s former provost’s allegations of gender bias shortly before she stepped down from the position.

“Our goal is to make everything as public as possible as quick as possible,” Crouch said.

Joe Compeau, Carson College of Business senator, questioned if an investigation would have happened if Whitman County Watch had not published an article about it.

“There is this pattern that at a certain level when people are behaving badly, nothing happens,” Compeau said. “When it becomes public — I’m thinking about a former [athletic director], I’m thinking about people in the Athletics Department, I’m thinking about these other things that until these things become public — then all of the sudden we go, ‘Oh we’re going to be transparent.’”

Crouch said he did not know the answer to that question, but Schulz authorized an investigation the night he heard about it.

“He takes this very seriously and he pledges transparency,” Crouch said.

Compeau said he wants a process in place where unusual actions are openly discussed before it becomes a matter of “something to see here.”

“We’re not transparent until we’re forced to be transparent,” Compeau said.

Stacy Pearson, vice president for Finance and Administration, said starting in July, WSU will be able to return to the process of setting an annual budget at the start of the new fiscal year.

“At the end of fiscal year 2020, we will finish with what we call the Fiscal Recovery project and then we will just go into — get this — an annual budget that we adhere to,” Pearson said.

She presented the ways the university has regained a net income in its operating budget during the recovery project. She said along with cutting expenses, the university looked at ways to increase revenue sources as well.

“What I was seeing is a five-year trend that even though our enrollments have increased, we weren’t bringing in net tuition revenue,” she said.

The use of this program enrolls more out-of-state students that gradually bring in more revenue than in-state residents if colleges manage the net return properly, she said.

“If you’re going to use those waivers, make sure you’re using them to meet your mission,” she said.