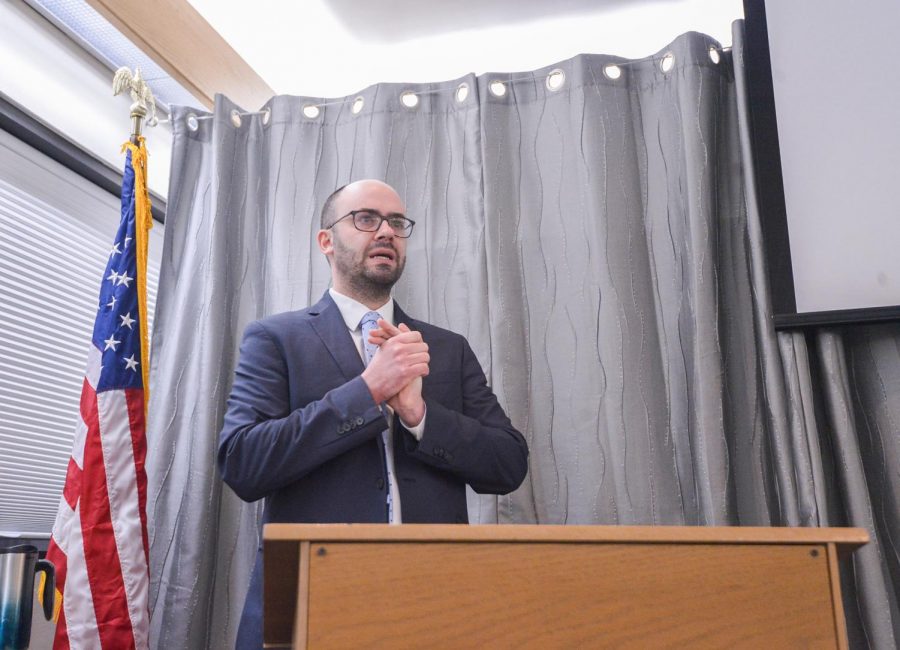 Matthew Fox-Amato discusses the use of slave photos as a way to build white supremacist networks among slave owners on Thursday evening at the Neill Public Library. “Photography is promoting, I would suggest a more embodied and central representation of enslaved people,” he says.

Matthew Fox-Amato spoke about the power of
photography and how it highlighted the struggles of enslaved people in the U.S.
on Thursday at the Neill Public library.

Fox-Amato is a cultural historian of the U.S. and
a historian of visual and material culture. He recently published a book
entitled “Exposing Slavery: Photography, Human Bondage, and the Birth of Modern
Visual Politics in America.”

“Photography is promoting, I would suggest a more
embodied and central representation of enslaved people,” he said. “It’s moving
their bodies, their faces, their emotions as much as we can discern them to the
centre of the frames.”

Fox-Amato said
enslaved people feared the physical violence used by their masters to maintain
control on plantations. He said
their fear can be seen on their faces in the photographs.

Fox-Amato
spoke about portraits of enslaved women with white children, he said they
assume the role of the nurturing surrogate mother. For many of these
children because of their ages, they see these black women as extended members
of their families.

Fox-Amato
showed a portrait of President George Washington with his family and in the
back of the portrait was an enslaved man serving the family.

“The founding fathers were complicated people and
when they were writing about equality in the declaration, they’re thinking
about all white men being created equal, rather than thinking about a
multiracial society,” he said.

Fox-Amato talked about how the routine use of
photographs of black bodies to self-justify exploitation was a form of
domination and helped build white supremacist networks.

“Slave photography gave masters potent tools to
materialize what the slave industry was and in doing so they’re refashioning
photography,” Fox-Amato said.

An African American attendee at the event shared
her experience of growing up in the south and had a conversation with Fox-Amato
about how the education system does not teach kids enough about the past
regarding slavery.

Fox-Amato said since living in the digital world,
these vintage photographs now resonate more and holding these images was very
powerful in its own right. He said it helped him understand what the material
world was back then.

“You get abolitionists coming back to statements
like ‘all men are created equal,’ and using this to point out the hypocrisy of
a land that was supposedly founded on freedom and yet slavery has been the
center of American history since the 1600s,” Fox-Amato said.