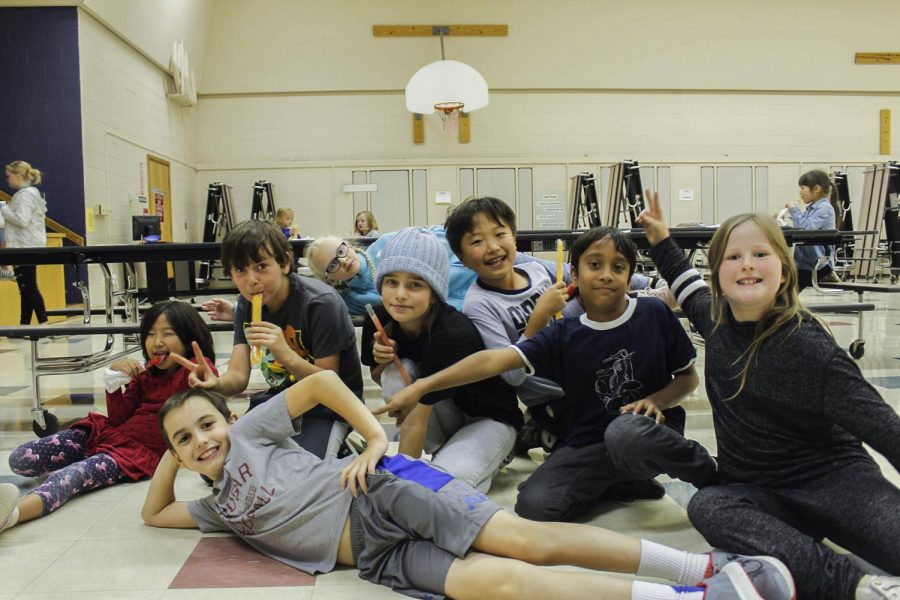 Students at the YMCA after school program, a partners with United Way Whitman County, pose for a photo.

These are a few of the ser­vices provided locally in part
because of funding by United Way of Whitman County.

A local branch of the nation­al organization, United Way Whitman
County is a nonprofit focused on strengthening com­munities through education,
health and financial stability, according to the United Way
website.

are the core of United Way’s goal, but those tenets
aren’t necessarily the only deciding factors in the work United Way does
throughout the county.

“We kind of act as the glue that holds communities to­gether,”
he said.

“This really isn’t a one-per­son job, and it’s not really
an organization with an end goal,” Fejeran said.

Paige Collins, executive di­rector of the Council on
Aging & Human Services (COA), said United Way has raised funds for them for
years. United Way has helped them serve meals to senior citizens, fund their
COAST transportation system, fund reconstruction and re­modeling at the Colfax
Pantry building. The organization has even helped the COA purchase a big box
truck so they could pick up food in Spokane and deliver it to pantries across
Whitman Country.

Collins said that every year they present United Way with
what they would like help funding, and United Way helps them raise it from
there.

“We’re really quite happy that we have such a
relationship with them, and

Eric as the new interim di­rector has been great to work
with,” Collins said. “It’s been a huge asset for us.”

Kris Finch serves as vice president on the board of Unit­ed
Way of Whitman County. She said she helps determine the budget, outreach in the
community and helps commu­nicate with agencies.

“Our dollars help extend the 12 different agencies we con­tribute
to, help

extend their efforts to reach their clients…we try to
give as much as we can.” Finch said.

Fejeran said recently Unit­ed Way has tried moving away
from how they used to raise money. The local branch is working toward raising
money through small-dollar donations throughout the year, rather than a big
campaign as they used to do in the past, he said.

“It’s about encouraging people to donate $10 a month
which is sometimes … a cup of coffee or it’s your breakfast on your way to
work or your way to class,” Fejeran said. “And that $10 compounded with five
other people who are donating $10 a month really makes a dif­ference in
providing services, hearing screenings and health screenings … childcare center
or summer meals through the YMCA.”

Fejeran said that the nature of fundraising is changing,
and he’s hoping to make United Way adapt. He said the pub­lic is becoming
smarter about their money and wants to know more about where their money is
going, which means United Way has to focus more on communication.

“We have to be 100 percent transparent with where our
money goes,” Fejeran said.

He also said that United Way recently changed their name
from United Way of Pullman to United Way of Whitman Coun­ty, to better
represent the com­munity they serve.

Outside of United Way, Fe­jeran said people can help just
by finding something they’re passionate about and working to make a difference.

“I feel personally that you’ll reach a point in your life
where you’ll want to live for something beside yourself and whether it’s
through United Way or some­thing else, find a pathway to give back to your
community,” Fejeran said.