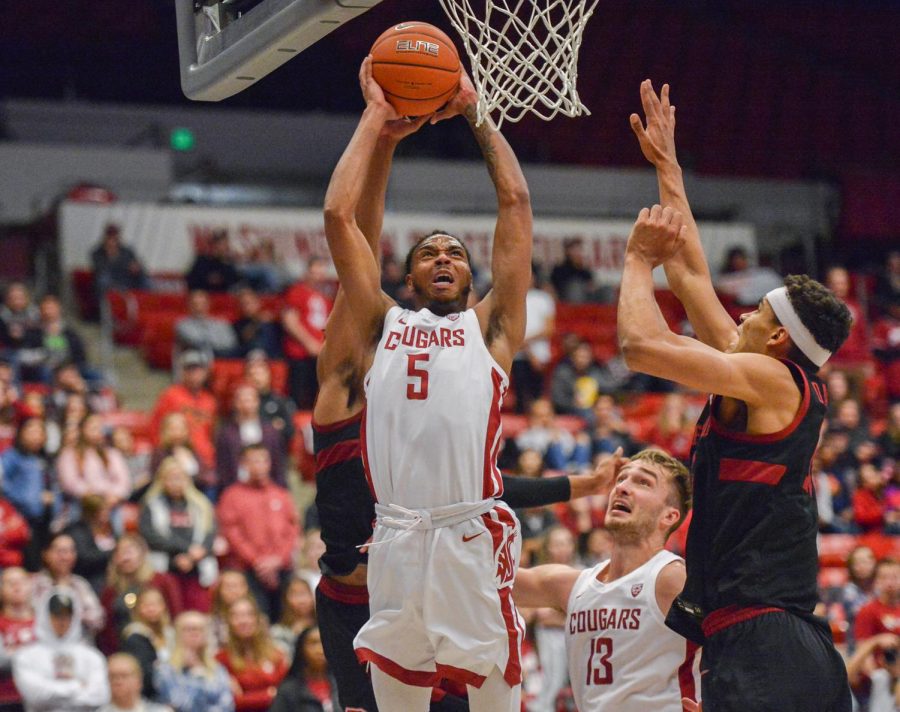 Junior guard Marvin Cannon goes up for the dunk against Stanford on Sunday evening at Beasley Coliseum.

Sophomore forward CJ Elleby led the Cougars (14-14, 5-10) in
scoring once again with 22 points. He also added 10 rebounds to his stat sheet,
posting his seventh double-double of the season and fourth in the past five
games. He contributed on the defensive side of the ball with two steals and two
blocks.

“He’s done some workouts and stuff like that,” Smith said.
“So, I think we’re close to having him.”

Elleby scored the first points for WSU with a deep 3-pointer
as the shot clock ticked down to its final seconds. WSU’s next basket came almost
three minutes later from a Pollard hook shot, his first points of his last
Cougar home game.

The crowd exploded with cheer with 12:37 left on the clock
as junior forward Tony Miller dunked on a Stanford defender and gained a foul
in addition to the basket.

Sophomore forward Aljaz Kunc checked into the game with eight
minutes left in the half. This is his second game played in the Cougars’ past
five contests.

Stanford led WSU since the first basket of the game, though
WSU did not allow the lead to surpass double digits for over 15 minutes. WSU
tied the game at 16 with 8:14 to go in the half after a pair of free throws
from Elleby.

After that point, the Cardinal went on a 17-3 run until 3:10
left in the half. WSU regained some ground up until halftime by responding with
a 10-3 run.

Stanford led 36-29 at halftime. Elleby was the game’s leading scorer with 16 points on 5 of 11 shooting. Elleby’s 16 points at the half almost tripled the total number of points he had against Stanford in January.

As the second half started, Stanford went on a 7-3 run in the first two minutes and extended its lead to 11. The Cardinal kept a double-digit lead up until a mid-range basket from Robinson brought Stanford’s lead down to eight with 15:19 on the clock.

Stanford led WSU 47-43 with 12 minutes left; this was the closest WSU came to overtaking the Cardinal lead. Stanford brought its lead back up to double digits with 10 minutes left in the game. The Cardinal held its double-digit lead for eight of the final 10 minutes of the game.

Smith said this was the best chance for the Cougars to
attempt to comeback but fell short.

“I knew we were going to have to do something like that to
keep it close and give ourselves a puncher’s chance,” Smith said. “They’re a
good team.”

Miller picked up his fifth and final foul with over five minutes left in the game. He finished the game with eight points. A sole basket from Kunc was the only other points off the bench.

“Having him back off of injuries is huge,” Pollard said. “He’s a smart player. He’s tough. He’s good around the rim.”

A questionable shooting foul was called on Kunc in the final
five minutes of the game, which was met with outrage on the sideline from
Smith. Smith picked up a technical foul for his outburst; his second of the
season.

Chances for a comeback ran thin in the final four minutes as
WSU trailed 68-50 with 4:36 left. Both teams traded seven points of their own
for the remainder of the game.

Pollard and Robinson checked out of the game with 15 seconds
left in the game and received a standing ovation from the Beasley crowd. They
both took a trip to center court and kissed the WSU logo before heading to the
bench.

They said this was improvisational, but they wanted to show
their true love and appreciation for WSU.

“This is just a special place, and it’s a family environment,” Robinson said. “We’re going to miss playing here.”

WSU emptied its bench to finish the game and lost to
Stanford 75-57. Despite the outcome of the game, the Cougars played hard and
competed well, Smith said.

Robinson and Pollard combined for 18 points in their final
game in Beasley Coliseum. Robinson was the WSU’s player of the game after
posting a career high in points.

WSU heads to Seattle to take on the University of Washington Huskies with intentions to sweep the season series for the first time since 2017. The game will tip off at 6 p.m. Friday in the HEC Edmundson Pavilion in Seattle. The game will air on FS1.