Melisa Ates, Yang Lee win both of their double matches in New York 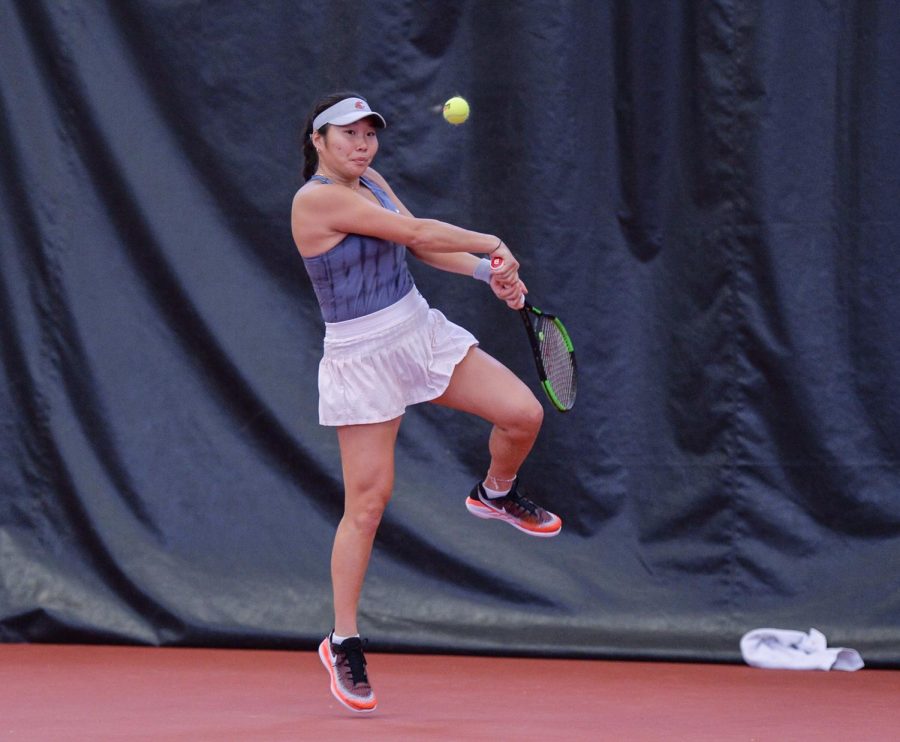 Sophomore Hikaru Sato looks to connect with the ball against Gonzaga on Feb. 8 at Hollingbery Fieldhouse.

The WSU tennis team split the first two matches of their road trip by losing to Columbia University on Sunday and beating Fordham University on Monday.

WSU (7-2) ended its four-match win streak in a close match that came down to the final point. Columbia (9-2) upset the 34th ranked Cougars to win its seventh match in a row. This was WSU’s first loss since losing to No. 1 Stanford on Jan. 26.

The team followed Sunday’s loss with a dominant 7-0 win over Fordham (3-6). Junior Michaela Bayerlova, did not participate in Monday’s match.

Singles competition started with Columbia’s junior Jennifer
Kerr defeating Sato in two straight sets. Bayerlova followed with a win over
sophomore Akanksha Bhan. Both team’s number one singles players are nationally
ranked, with Bayerlova being 63rd and Bhan being 102nd.

The deciding match was played by Lee and Columbia’s freshman
Julia Haynes. Haynes won the tiebreaker in the third set to give Columbia the
victory over WSU.

Both of the Cougars losses have come on the road this season as they maintain their 6-0 record at home and 1-0 record at neutral sites.

The Cougars came into Monday morning ready to get back in
the winning column, as they did not lose a single set against Fordham.

Doubles contests against Fordham were won by Ates and Lee
6-0, and Sato and freshman Carla Quadflieg 6-4.

All six singles contests were won despite not having
Bayerlova. Matches were won by Sato, Ly-Nguyen, Ates, Jittakoat, Lee and
Quadflieg.

Columbia will play at home against St. John’s University on Friday, and Fordham will travel to play the New Jersey Institute of Technology on March 6.

The Cougars will fly back across the country to California
to take on the University of San Diego at 1:30 p.m. on Friday and the
University of California Santa Barbara at 11 a.m. on Saturday.