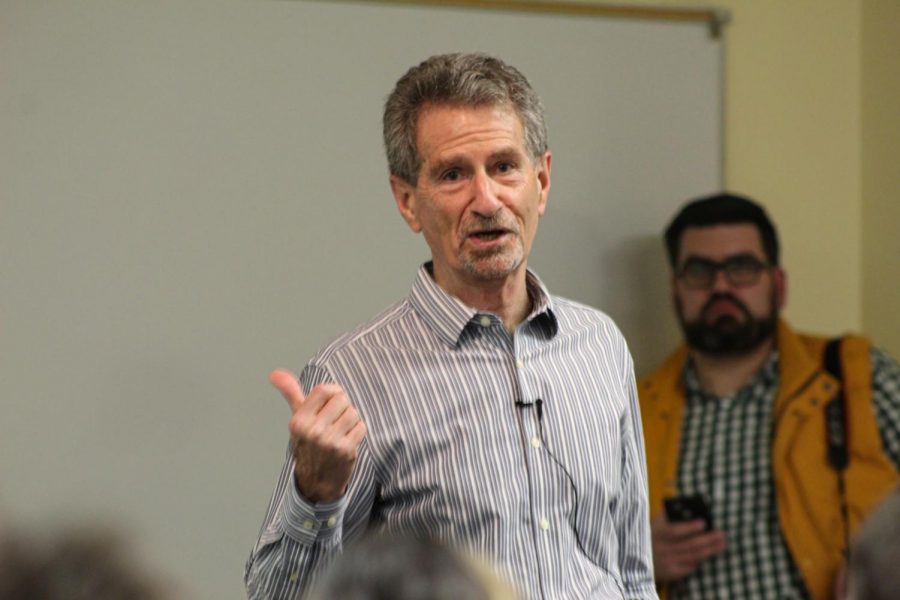 Rob Ruck, a history Professor at the University of Pittsburgh, discusses how football has changed in Samoa and how their culture has been integrated into the sport on Tuesday evening in Todd Hall.

A professor from the University of Pittsburgh spoke about the often alienating experience Samoan athletes face during their journey in U.S. sports, a topic that has been at the center of some controversy at WSU.

“Sport is at its core competitive, but [Samoan culture] also stresses service, ‘what you give, you get back,’” Rob Ruck, professor of history at the University of Pittsburgh, said.

Ruck spoke about his book “Tropic of Football: The Long and Perilous Journey of Samoans to the NFL,” during a talk on Tuesday in Todd Hall.

“By the 21st century, scores of Polynesians were playing in the NFL, hundreds in Division One football, and many more in junior colleges,” Ruck said. “I do not think there is any other culture producing sporting excellence and so many disproportionately talented athletes per capita as Samoa.”

More than 100 people attended the lecture including students from sociology and sports management classes. Ruck shared background information about Pacific Islander athletes, describing their island culture and their commitment to giving back or “toe tu’uina atu.”

John Wong, WSU associate professor of sports management, said the aim of this lecture was to help students better understand what issues Samoan’s face in the sports world.

“Pacific Island students often experience feelings of alienation being so far from home and surrounded by people who don’t understand their traditions and culture,” he said.

In the summer of 2017, the WSU administration was accused of racial bias after some Samoan students were disciplined following an off-campus fight. This controversy was part of the reason WSU administrators visited American Samoa in August 2017.

He said many students ask for support in academics or general support for their interests other than the stereotypes others give them.

“[Ruck’s] focus is more on the sociocultural aspects of Samoan life and how those aspects will influence how the outside will perceive them and not perceive them,” Wong said.

Sports usually work well as a catalyst for discussion, and both Samoans and Americans are attracted to football, he said. Sports offer a non-threatening way to discuss sensitive concerns beyond the field of play.

“Anyone interested in diversity and better understanding other cultures would benefit from attending the lecture,” Wong said.

Invitations were sent to many departments including athletics and history.

“Shame matters,” Ruck said. “You do not embarrass your family, your beloved, your church. Rap videos are sweet anthems to school and family.”

He said that Rolovich has invited Ruck to speak to his players in the past at the University of Hawai’i.

Ruck is also an Emmy award winning sport documentarian and has been a consultant in projects for Major League Baseball, Showtime and HBO.

Ruck signed books after the lecture for interested attendees.